Sir Adrian Boult presents a tribute to the violinist Sammons

In this radio programme, broadcast on the BBC Home Service in late 1957, Boult looks back at the life of one of the greatest British violinists, Albert Sammons, who died on 24th August of that year, through reminiscences and recordings. Sammons had retired from the concert stage a decade earlier through ill health, and thus these recordings date largely from his heyday in the 30's and 40's.

The examples chosen include major English violin concertos, which both Sammons and Boult championed throughout their careers - the Delius concerto was written for Sammons, who performed it with Boult for its première recording. We also hear Sammons alongside another stalwart of the era, the violist Lionel Tertis, in Mozart's Sinfonia Concertante, before exploring the chamber music of Fauré and Rubbra and an arrangement of a Dvorak song.

The programme is presented as broadcast, including opening and closing announcements, as recorded onto a specially made double-sided acetate LP disc, apparently cut by the MSS Recording Company Ltd of Colnbrook, Buckinghamshire, England (typed white paper labels cover the original MSS label, but the writing underneath is just discernable). In restoring this I've dealt with much of the surface noise on the record, though some remains at times, and have endeavoured to 'dust off' Sir Adrian's spoken introductions with some re-equalisation. The musical excerpts remain largely as broadcast, and include two minor dropouts present on the LP copy, though I have tackled some of the nastier sections of the original 78rpm discs used to make the programme.

Broadcast in 1957 on the BBC Home Service
Transferred from a private acetate 12" LP recording
Restoration and remastering by Andrew Rose at Pristine Audio, April 2008
Cover artwork based on a photograph of Albert Sammons 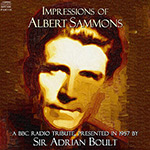