One of the great recordings of all time

It may come as something of a surprise to find this recording here at Pristine Classical - it can surely never have left the catalogue in its Decca release, and was most recently remastered by decca from their master tapes as recently as 2000.

It was during the preparation of our issue of the same piece in its 1936 world première recording (PASC108) that curiosity got the better of me and I obtained a copy of one of the movements of the 1952 recording from iTunes in its current incarnation. I was surprised by the sound, but not pleasantly so - it had an unnatural harsh forwardness which grated on the ears, a kind of tiring artificiality which I didn't like. As I had all of the requisite recordings on my system I carried out a quick XR re-equalisation of the movement (the 4th, as it happens), and shared the results with my colleague Peter Harrison of disk2disc in England, asking him to tell me which he preferred without informing him which was the Decca issue and which was my own tweaked version.

It was no surprise to me, but perhaps a surprise to Peter (who has always held Decca's engineers - rightly - in very high regard) to find my XR remastering clearly and considerably improved upon the Decca issue. This testing was done effectively blind, as i did not reveal which file was which until after he'd made his mind up.

It was at this point that Peter revealed to me that he had a near-mint vinyl copy of the original issue. Taking that same movement, Peter transferred it from the vinyl disc and sent it to me as a lossless 24-bit FLAC file to receive the same XR treatment I'd given the iTunes download. Once again the results were excellent, clearly outshining the Decca CD and LP.

And so the perhaps surprising decision was made to restore and issue this well-known recording and put it head-to-head against Decca's own much-praised CD issue. I hope you'll agree with those who've heard and commented on it prior to release that it is not only a truly magnificent recording in its own right, but that this remastering brings us closer than ever to the magic spell cast in May 1952 by the Vienna Philharmonic, Bruno Walter, Julius Patzak, and of course the incomparable Kathleen Ferrier, already only too aware of the cancer that would take her life the following year.

Transfer from LP by Peter Harrison at disc2disk
Restoration and XR remastering by Andrew Rose at Pristine Audio, April 2008

Cover artwork based on a photograph of Kathleen Ferrier 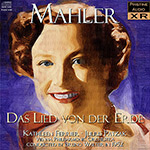 The restoration is nothing short of magnificent

This, of course, is the most famous studio recording ever made of Mahler’s great symphonic song cycle. It’s currently available on a reissue by the nominal original label, Decca 466576, as well as on Regis 1146. The latter disc also contains a Ferrier performance of the Brahms Alto Rhapsody with Clemens Krauss and the same orchestra from 1947. Yet this is as demonstrably superior in sound quality to either of those as EMI’s most recent issue of the Klemperer Mahler Fourth (67035) is to any other previous edition.

The reasons will be obvious to anyone familiar with this recording from the very first notes. The sound is fuller, more natural, and less edgy on the top end than any past or present CD incarnation. About a quarter-century ago, at the dawn of the CD era, I owned this on a different Decca issue, but eventually gave up on it because, although the sound was clear enough to allow you to hear the stays on the oboe, it was also slightly uncomfortable to my ears.

For me, personally, this is the best of the four Walter performances I’ve heard, the others being Thorborg/Kullmann (1936); Ferrier/Svanholm, with the New York Philharmonic (1948); and Forrester/Lewis from 1960. It’s one of his swiftest readings, coming in under an hour, and actually less romantic in feeling than Otto Klemperer’s supposedly non-romantic recording from 1965. But it is not my all-time favorite reading of the score, great as it is. That honor goes to the little-known 1939 Dutch broadcast by Thorborg, Carl Martin Öhmann, and the Concertgebouw Orchestra conducted by Carl Schuricht (Bel Age 15). For me, Schuricht conducts the most intense and texturally transparent reading on records, bar none; the 1939 sound quality is absolutely stupendous for its time; and Öhmann is the finest tenor soloist I’ve ever heard in this work. (I should also mention that my favorite stereo/digital reading is the out-of-print DG disc with Brigitte Fassbaender, Francisco Araiza, and Carlo Maria Giulini conducting the Berlin Philharmonic, a recording savaged by critics for reasons I could never quite fathom. Despite slower tempos, Giulini’s pacing and shaping are simply magical, and the way Fassbaender’s voice melts into nothingness in “Der Abschied” still sends chills down my spine.)

But back to this Das Lied. Julius Patzak was a very great artist who was simply not born with a great voice. Even in the best of circumstances, its tone was thin and rather colorless, yet to listen to the intelligent way he sings here is to understand why both Walter and Furtwängler admired him—also why he was considered a great Florestan in Fidelio, despite having a very small, un-Florestan-like voice. Ferrier, on the other hand, had one of the great voices of all time. Relistening to her, I was struck by how much she, like Louise Kirkby-Lunn and Helen Watts, sounded like a German contralto. Her low range is so effortless as to almost sound bottomless: she sounds as if the voice extended at least three notes further down than the lowest note she sings. Her interpretation, particularly in “Der Abschied,” has always been a matter of personal taste (she does not really sing softly in all the passages marked as such, but in fact sings out forte on certain notes), which for me discounts it slightly—but only slightly—in comparison to the other recordings I’ve named. But omigod could she sing. No one, in my memory, imparts such geniality and lightness to “Von der schönheit” as Ferrier. Here, no one can touch her, not even Thorborg or Fassbaender.

The Vienna Philharmonic, like the New York Philharmonic, always had Mahler “in its blood,” so to speak, and they play their hearts out for Walter here. One little thing I noticed which I’d forgotten: the solo violin in “Der trunkene in Frühling” plays with much more portamento than we’re used to nowadays.

If you admire this recording as much as I do (or more), this is clearly the pressing to own. The restoration is nothing short of magnificent.