POULENC Concerto for Piano and Orchestra
Recorded c.1952, issued in the UK on LP as Felsted RL 89006
Transfer and XR remastering by Andrew Rose at Pristine Audio, February 2008
Duration 19:06

The world-première recording, remastered and reissued for the first time!

Annette Haas-Hamburger had particularly close links to composer Francis Poulenc. She lived upstairs from him in the same Paris apartment block, and as they were both accomplished pianists who regularly played together.

Thus one might hope for specific insights here in this first recording of the Poulenc Concerto for Piano and Orchestra, recorded most probably in early 1952 (the earliest reference we can find to the recording is in a French magazine dated to September of that year). Though the orchestra may not be top notch, and the sound a little scrappy at times, there's no doubt the feeling brought to this delightful piece.

From an audio-restoration perpective there were specific problems to be overcome here beyond the slightly scratchy original vinyl and a rather unnatural sound balance. At times this poor balance is still evident, though far less so and not in such a way as to detract from your enjoyment of the music. Once again, the careful application of the XR remastering process has proved highly successful in rescuing a moment in musical history from near-oblivion. 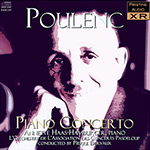