Notes on the restoration: Mengelberg's second recording of Strauss's Ein Heldenleben, and the only one recorded by the orchestra and conductor for whom it was written, benefits hugely from the advances being made in recording technology at the time. Though perhaps not quite up to the performance quality of his 1928 New York recording, it certainly is better captured, and responded exceptionally well to XR remastering. Both recordings are essential to any understanding of this piece. 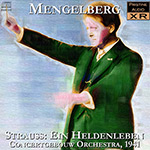 It is the Concertgebouw performance that scores more points in the overall presentation of the music, and which in the final analysis gives us a much more “legendary” performance

This surprising dual issue of both of Mengelberg’s recordings of Ein Heldenleben, and both in superbly reengineered sound, gives one a rare opportunity to compare and contrast them. I owned the New York Philharmonic-Symphony Orchestra recording on an RCA Victrola LP from the early 1970s and, though I liked it, I was not altogether convinced of its legendary status. In 1986 I bought the Concertgebouw Orchestra version on an old Telarc CD and, though it had your typically harsh, congested radio sound and lots of acetate crackle, I found the performance much more intense, cohesive, and emotional—even in the soft passages.

Comparing them now, one notices immediate differences. The New York Philharmonic-Symphony Orchestra of that era (1928) had a simply gorgeous sound quality; every section was equal in timbre, weight, and color, and each section had superb first-chair players (Mishel Piastro was concertmaster, Bruno Janicke the first horn, and both get their fair share of solo passages here). The Concertgebouw Orchestra (in 1941), on the other hand, was a much more uneven band. Due to either Mengelberg’s preferences or his reluctance to replace inferior players, the violins sounded harsher, the woodwinds edgier. Yet to my ears, it is the Concertgebouw performance that scores more points in the overall presentation of the music, and which in the final analysis gives us a much more “legendary” performance.

For example, the strings in the first half of “Der Held” are far more beautiful in the New York version, but about halfway through the orchestra sounds a bit sluggish rhythmically while the Concertgebouw version maintains a forward pulse. In the beginning of “Des Helden Widersacher,” the winds of the CO are much livelier, more incisive than the NY P-SO. “Des Helden Gefährtin” is supposedly five seconds longer in the CO version than the NY P-SO, but it doesn’t sound it. Both solo violinists (I believe it is Piastro on the NY P-SO recording) use portamento that is no longer heard in the music but, overall, there is much more portamento throughout the NY P-SO recording, and it becomes annoying after a while. The one section in which the NY P-SO is markedly superior to the CO is in “Des Helsen Walstatt” (The Hero’s Battlefield), where the more solid sound of the NY P-SO , combined with a slightly brisker tempo (8:18 compared to 8: 39), creates slightly more tension, but the CO performance is certainly not lacking tension.

Of course, your proclivity to buy one performance rather than another will depend on your familiarity with both of them. Except for the extra portamento in the 1928 recording and the extra clarity in the 1941, there’s not really a tremendous amount of difference in overall musical concept, certainly not as widely varied as, say, certain earlier and later performances by Toscanini or Furtwängler. Yet if you like Mengelberg and believe that this was one score that he “owned,” you may certainly want to get both. The sound restoration was, to my ears, even more striking in the 1941 broadcast than the 1928 studio version.

This article originally appeared in Issue 31:5 (May/June 2008) of Fanfare Magazine.