This collection of largely less well-known music from the tonal twentieth century spans some seven years of recordings at a time when technology was starting to develop quite quickly. That said, the sound quality throughout this collection remains high. Of the recordings here, the first was the trickiest to remaster, thanks to a higher than average degree of hiss - trying to suppress this whilst retaining the top treble was a real challenge, and some residual noise remains audible at times. Meanwhile I could find no other recording of the Sinigaglia with which to compare this one - fortunately, being the most recent of the set it was the recording which needed least work, and I was able to carry out a more general equalisation based on an average of the other recordings here, whilst taking into account the extended frequency response of the original. It should be noted that there are moments of mild overload distortion which have been impossible to entirely eradicate, occuring mainly in the Atterberg symphony. 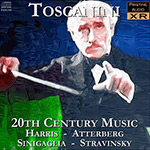