It has taken many hours of painstaking restoration work over almost an entire year to rescue and remaster these incredibly rare and valuable recordings. Despite at times a huge degree of surface noise, it is astonishing to hear the sound quality one is able to extract from these tired and worn grooves - only in the Coronation Overture does one note a loss of clarity and brightness in the upper frequencies.

Whilst at times there are inevitable remnants of the disc noise still audible, these recordings are remarkably well preserved, and it has been an honour and privilege to bring this hugely important project to fruition. 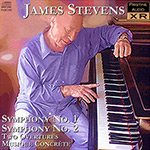 The Five pieces collected together on this recording are a superb introduction to the great versatility, ability and range of an unjustly neglected composer. James Stevens (b. 1923) , who studied composition under Frankel, Boulanger and Milhaud, was regarded by the powers at the BBC in the 1950's as a shining new star in the world of British composers, only to fall out of favour with the new regime of the 1960's.

We are fortunate therefore that he was able to retain acetate disc copies, at 78rpm and 33rpm, of these wonderful broadcast performances from the fifties, and that with all the modern restoration techniques currently available, we have been able to restore these recordings to a level more than fit for release.

The Miniature Overture, 'In A Nutshell', introduces one of Stevens' great contributions to music - his compositions for film, TV, radio and theatre. It was written for a 1955 documentary film, and demonstrates the composer's excellent ear for melody, as well as his ability to adapt for the specific stylistic requirements of the genre. (NB. We are unsure of the conductor of this recording - but it is quite possibly also Stanford Robinson.)

Stevens' Symphony No. 1, which won the Royal Philharmonic Prize, and his Symphony No. 2 are both fine works which build on a tradition of British twentieth century composition whilst moving forward perhaps in more of an evolutionary than revolutionary fashion. When I asked the composer about possible titles or keys for the annotation of this release, he stated that although there was no specific key for either of the symphonies, both do resolve at the end to the same key in which they began.

The first symphony is in three movements:

A restless, searching and at times dramatic first movement displays the composer's full command of orchestral texture, as well rhythmic, harmonic and melodic invention. It gives way to a more searching, haunting second movement, in which shades of light and darkness are brilliantly interwoven over a restless, near-continual pulse of underlying energy. This energy seems to burst out into the open during the final movement, which pulsates with syncopated rhythm splashed liberally throughout the broad composer's orchestral palette, driving the music relentlessly towards its dramatic conclusion.

The second symphony is heard here in its world première performance, and is written in four movements:

It is in the opening movement that, as a devotee of the music of E. J. Moeran, I hear faint echoes of two of that composer's greatest achievements, the Symphony in G minor and his Sinfonietta. Stevens opens with a chugging rhythm similar to that of Moeran's Symphony, whilst exploring tonalities and melodies which seem to build upon and move forward the more advanced style of the Sinfonietta. As the movement progresses, however, we find ourselves moving ever more firmly into Stevens territory, leaving behind these possible references as mere echoes of a previous time.

There can be few twentieth century symphonies written with a minuet, that staple of the Classical era almost obligatory in the symphonies of Mozart or Haydn. Not that Stevens' playful 'Like a minuet' movement would sit comfortably in any of his illustrious predecessors' works. He retains a wonderful lightness of touch, wihlst playing skillfully with the conventions of rhythm, building around fragments of delightful melody, scattered delicately around a dance that never quite ends, but segues into the unsettling opening to the Adagio, a broad and expansive movement that is the soul of this work.

The final movement begins with a series of dissonant chords, before gradually building up into a vibrant vividness. Tension is built up to a dramatic climax about halfway through the movement before falling back to a section of listless interwoven melodies that gradually pull one towards the final, thrilling upward motion of the work's climactic conclusion.

The two symphonies are presented here either side of the first broadcast performance of Stevens' Coronation Overture Lion and Unicorn. The BBC announcer tells is that the overture "stresses the festival atmosphere of coronation time, rather than its solemn pomp", and though the work open with a suitably regal fanfare, it quickly takes us on a whirlwind tour of - I imagine - the street parties and celebrations of London town during the coronation of Queen Elizabeth II. Despite the slightly poorer sound quality and frequency range of this recording by comparison to the others here, one is quickly swept away by the dynamic vigour of the music.

This collection ends with something quite different - a short section of Musique Concrète, which is introduced as part of a radio programme and includes music and narration from the film The Rival World. Here we're in a completely different sound world, with electronic noises, tape manipulations and the complete - if limited by modern standards - palette of sound available to the pioneers of electroacoustic music in the 1950's. When heard in the context of the narration one senses the brilliance of the music, which brings the words alive without need of the accompanying pictures - indeed, as with all good radio, one's imagination provides better images than the film-maker ever could.

Studied initially with Benjamin Frankel in his exclusive class at the Guildhall School of Music in London. There he won several prestigious awards including the Royal Philharmonic Prize for his First Symphony; the Wainwright Scholarship for 'composer of the year'; and a French Government Bursary which took him across the Channel to study with Darius Milhaud at the Paris Conservatoire. There he met Nadia Boulanger who made him one of her star pupils who received Saturday evening tuition free of charge. He also enjoyed an open invitation to Arthur Honegger's classes.

He later won the coveted Lili Boulanger Memorial Prize in Boston, USA, for 'composers of exceptional talent and integrity' awarded by a panel of judges which included Stravinsky, Copland and Villa-Lobos. Another award was the Mendelssohn Scholarship which even Benjamin Britten failed to achieve, despite several attempts! As a result of this he spent some time in Berlin at the Hochschule für Musik. He also won the Worshipful Company of Goldsmiths' Award while his most recent honour was the BDK International Award in Tokyo for his Buddhist requiem Celebration for the Dead played by the Tokyo Symphony Orchestra.

Stevens commenced his extensive film career while still a student and was acclaimed at the Ealing Studios where he constantly devised new film music techniques which are now standard practice.

Unusually, Stevens has never confined himself to one particular musical genre and has taken every opportunity to take part in pop music, jazz, films, television scores, and musicals; his musical Mamízelle Nitouche being revived in London's West End in the autumn of 2001. Although also concerned with serious avant-garde works, his music is melodic rather than atonal.

In one year he was the only British composer to be selected for the annual International Society for Contemporary Music (with Etymon) while having a disc at number one in the Melody Maker charts (with Exploding Galaxy). In 1990 he was nominated for the BAFTA music award for his contribution to Chelworth - eight one-hour episodes. In 1995 he was invited to give a 'James Stevens Day' in Cincinnati, shortly after which he was invited by the Musicians Union of Japan to represent English artists at the Hiroshima and Nagasaki 50th anniversary memorial ceremonies.

In 1998 the Cleveland Orchestra Piano Trio gave the world premiere of Concertante a Tre and in 1999 Stevens was commissioned to write David's Round for a 9-year-old prodigy violinist, also in Cleveland, USA. The following year he was commissioned by members of the Cleveland Orchestra to write a work for cello and piano called Duo Per Umanita. Also in 2000 Stevens completed his magnum opus The Reluctant Masquerade, dealing with the human psyche and nature of time. In 2001 he wrote the incidental music for American writer Daniel de Cournoyer's epic one-man theatre show Bells to Hell and also a Processional for a wedding in Australia.

James Stevens studied with Darius Milhaud and Nadia Boulanger. He has written many other works apart from those featured here including two further symphonies. His film scores include Cockleshell Heroes, The Baby and the Battleship and Ring Around the Earth.

These mono recordings are from the composer's archive acetates. With Pristine's technical magic and sheer punctilious hard work they sound strong if unsophisticated. This is honest-to-goodness analogue mono from BBC broadcasts.

Stevens - to be distinguished from Bernard – proves that he can write in an easily approachable tonal idiom. There is a twist of Copland in In a Nutshell which is announced by a BBC presenter in typically 1950s accent and style. This little overture has a film-calypso air about it with plenty of glint and silver to top it off. There’s a touch of Benjamin and Williamson here as well. The First Symphony is not announced. It is in three movements. The first is in an obviously more complex idiom which is dyspeptic. While never cutting the ties to lyricism it can be equated with the tortured tonality of Alwyn and Rawsthorne. The luminously plangent language of Roy Harris and John Veale can be heard in the second movement but through a recording that works to obscure the detail. The finale is crunchingly dramatic -with a febrile plunging panicky anxiety at large. The final victory is grippingly sour. The symphony won a Royal Philhamonic Society prize. The Lion and Unicorn is a Coronation year effort. It is an uproarious affair with more of the Rabelaisian Auric about it than the Walton or Ferguson march-overtures of that year. The other voices are again Harris and Copland. This recording is announced, unlike that of the Second Symphony which, sadly, suffers from some 'tizzing' distortion. It is in four movements which again touch on the lyrical complexities of Rawsthorne and Shostakovich – some Arnell here too. The third movement is a sinister and poisonously searing but extremely inventive Adagio with an acidic dissonant edginess. This carries over into the final anxiety-threaded Maestoso. Stevens must have been open to electronic music because the final track, called Musique Concrète is a warbling, buzzing, grunting and grumbling mixture of electronic sounds used as a soundtrack for a film about the ‘evils’ of the insect world. The sensationally melodramatic commentary takes us back to those ten minute documentaries of the 1940s and 1950s but adds a touch of Hammer horror and Vincent Price. Its humanising of insect activity is a strangely sinister echo of the gratingly anthropomorphic saccharine cutesiness of the Walt Disney films of the 1950s and 1960s.

You can also hear James Stevens’ Reluctant Masquerade (see review) and his miniature Concerto Concitato for piano and orchestra via Pristine recordings. Well worth hearing even if with my copy of the disc there were no notes about the composer or his music. You can find these at the Pristine site.

Psychologically complex music productively adrift in the shadowlands between tonality and dissonance.