This absolutely superb performance of Sibelius' Sixth Symphony was originally recorded onto disc (I assume acetate). My copy came from a reel-to-reel tape transcript direct from the disc and was in pretty good condition, though clearly with both disc noise, clicks and crackle and a small amount of tape hiss to deal with. I also managed to remove or quieten a number of otherwise distracting audience coughs.

Thereafter I applied the XR remastering process, which in this case served to bring our more weight, depth and solidity in the bass, clear out a degree of murkiness in the mid-range and add further clarity to the upper treble frequencies whilst dealing with a certain tendency to harshness in the masses violins.

Finally further noise reduction in the very high frequency range was carried out using a brand new remastering package (called "RX"!) from Izotope - launched within the last week - which worked brilliantly to preserve the 'air' in the recording whilst eliminating the hiss, where all the other software I tried had stifled it somewhat.

What does remain towards the end of the recording is a small degree of background noise from the acetates and, at times, perhaps a small degree of groove distortion from the original disc. By this time however, given a performance like this, you'll probably be so absorbed in the music that you'll simply not notice it - this really is a tour de force from Beecham and his Royal Philharmonic!

Recorded live at the Royal Albert Hall during the Proms Concert of 15th September 1954
Transfer and XR remastering by Andrew Rose, October 2007 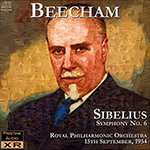