As with our well-received Symphony of the Air concerts, this recording was taken from a very good open-reel tape source, and required relatively minimal restoration to bring it up to an excellent sound quality. As with the other recordings in this series from Pristine Audio, the programme is presented as broadcast, complete with announcements and introductions by NBC announcer Ben Grauer. In the original recording of this programme there is a short gap during applause for station announcements - I cut the gap out and crossfaded the continuing applause. This is the only edit from this live broadcast. The programme was originally recorded onto disc - bad damage to the disc was audible in the opening announcement and, despite extensive repair work, some evidence of this remains. Fortunately this does not extent to any damage in the musical content, which was preserved immaculately.

*Movement 5 of this 6-movement work is omitted 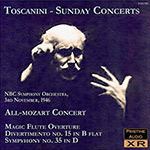