Pristine Audio has recently received a generous donation of reel to reel tapes containing a number of recordings prepared from original source material for a British collector by Walter Toscanini, son of the Maestro, and taken from the Toscanini archive.

The present recording does suffer from some wow and flutter. I have succeeded in repairing a number of damaged parts of the original, as well as managing as best possible the abrupt side-breaks in the disc transfers. You will note the rapturous applause which greets the ends of both 1st and 2nd movements, and that the latter is quickly cut off - this, alas is how the recording reached us. There was a similar abrupt cut-off at the very end of the recording, and I have been able to mix in some of the previous applause from the end of the opening movement to create a longer and more appropriate and satisfying ending to that which was originally present.

NB. In September 2011 this recording was reprocessed to take advantage of advances in pitch stabilisation software - namely Celemony's 'Capstan' software. This has largely cured the wow and flutter problems which were mentioned above and which plagued the recording throughout, being particularly noticeable whenever the piano played! Other than this the original sound quality of the 2007 remastering remains. The recording has not been repitched overall and retains the same track timings as our original issue. Since the original recording was released it has come to our attention that a small section of a couple of seconds' duration is missing from the final movement - this comes at a side change on the tapes as supplied by Walter Toscanini, the join of which masks the missing section well and preserves continuity. 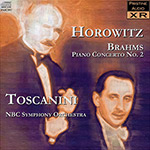 After hearing this performance, I feel I can safely discard all my other recordings of the work...

I’ve always believed that critics should reveal their personal bias at the start of a review so readers can realize that bias is not necessarily an objective statement. Here my disclaimer is that, except for two performances given over a lifetime, I’ve never felt that the late Vladimir Horowitz was anything near, or like, an artist.

His power and digital facility were indeed tremendous; but even when first exploring classical music, listening to his records unsettled and irritated me without my knowing exactly why. As I became a pianist myself, and heard so many others, I realized what it was. Most of Horowitz’s performances, to my ears, had neither legato “flow” nor any specific musical direction other than to stun the listener into submission.

The two Horowitz performances I truly loved were his 1930 Rachmaninoff Concerto No. 3, a relatively weak piece which he makes sparkle and sing, probably because he had recently coached it with the composer himself and because the conductor was the great Albert Coates, and the 1943 Red Cross concert performance of the Tchaikovsky First with Toscanini. That 1943 Tchaikovsky sings and flows in a way that the May 1941 recording cannot even begin to equal.

Now I’ve added a third performance to that brief list: this February 1948 concert version of the Brahms Second. It bears the same resemblance to the April 1940 recording of the work as the 1943 Tchaikovsky does to its 1941 counterpart. It’s not so much a matter of tempo as of phrasing, of tension and release in all the right spots, where the studio recording was all about tension without much release. Even in the piano’s first entrance, which is supposed to sound relaxed and warm, Horowitz in 1940 jumps the beat and cranks up the volume. Here, in this 1948 concert version, he does not.

And the difference doesn’t stop there. Toscanini, obviously inspired, brings the first movement to new dramatic heights without overreaching or compressing the tempo too much. The electrical charge that both men put into the music is palpable; one can easily envision the NBC audience sitting on the edge of their seats. At the end of the movement, though directed not to applaud in the printed program, the audience breaks into a convulsive frenzy.

The second-movement Allegro is lithe yet dramatic in a lower-key sort of way. In the famous Andante, cellist Frank Miller plays one of his most beautiful recorded solos, and the range of colors that Toscanini draws from the orchestra—despite the cramped AM radio sound—is truly stunning. In the midst of the movement, he almost suspends time completely, and the music seems to float, without bar-lines, into the ether. And yet another surprise awaits us in the final Allegretto. Rather than the furious stomp to the finish one heard in the 1940 recording, this version is light and playful, both the pianist and the strings giving it exactly the right light touch, like a lamb skipping down the road.

This performance has, of course, surfaced on CD before, but it is safe to say that Pristine Classical’s remastering is by far the best. Though there is still a bad moment in the middle of the first movement, undoubtedly the result of a permanently damaged acetate, the sound is generally full and vibrant. Restoration engineer Andrew Rose has also managed to bring a fullness of tone out of Horowitz’s Steinway missing from the studio recording. After hearing this performance, I feel I can safely discard all my other recordings of the work, save the similarly excellent 1929 reading by Arthur Rubinstein, playing with Albert Coates and the London Symphony.