Pristine Audio has recently received a generous donation of reel to reel tapes containing a number of recordings prepared from original source material for a British collector by Walter Toscanini, son of the Maestro, and taken from the Toscanini archive. Included amongst these are a number of fine and usually complete recordings from the NBC Symphony of the Air series.

This concert features an all-Wagner programme of orchestral highlights. Note that Toscanini conducts the original long version (the "Dresden" version) of the Prelude to Act III in Tannhäuser, as heard at the work's première in Dresden in 1845, and eventually published in 1860. It was later substantially cut down for the more commonly played "Paris" version of the opera, produced in 1861 - though it should be noted that further relatively minor changes were made by Wagner for a "Vienna" version of 1875, which is now most usually played, though still referred to as the Paris version. 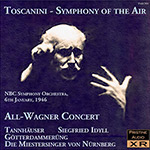