Pristine Audio has recently received a generous donation of reel to reel tapes containing a number of recordings prepared from original source material for a British collector by Walter Toscanini, son of the Maestro, and taken from the Toscanini archive. Included amongst these are a number of fine and usually complete recordings from the NBC Symphony of the Airseries.

This concert features, as its main work, Brahms' Symphony No. 4, as part of an all-Brahms concert. It was the first of Toscanini's radio Winter Season of 1945-6. 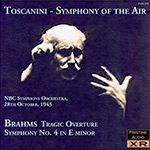