The source material for these restorations appears to have been assembled from at least two different disc recordings - it was presented to me as tape dubs of these discs. Of these, the second half of the concert (Hindemith) was of noticeably lower frequency range and fidelity than the first - I have done what I can to try and alleviate this, but the difference will remain apparent to the listener.

During the restoration of the Hindemith I became somewhat concerned by the apparent absence of coughing and other audience noises (something I'd worked on reducing or removing from the Haydn). However, other aspects of regular disc surface noise which could be heard towards the end of the final movement and which continued unabated into the immediate, spontaneous and ecstatic applause and final announcements convinced me of the likely authenticity of this part of the recording.

Cantelli with the NBC Symphony Orchestra

Guido Cantelli's debut with the NBC Symphony Orchestra, on 15th January 1949, was the first of four guest concerts the 28-year-old conducted with the orchestra that year - a number later expanded to eight concerts per year. Toscanini had been searching for a younger conductor to take over the orchestra created for him by NBC in 1938 during his absences (he was now into his eighties), and during an off-season concert at La Scala conducted by Cantelli, his is said to have commented, partway through, "that is me directing this concert".

The reception to this first concert can be heard at the end of the Hindemith - rapturous applause, cheering, whistles - something not then regularly associated with New York audiences. Similarly the press response was glowing, likening the young conductor physically to Frank Sinatra and musically to Toscanini.

There is little doubt that Cantelli was being groomed to take over Toscanini's mantle in due course. However the tragic death of the younger conductor in a plane crash in 1956, just two months before Toscanini's own death, put paid to an astonishing early career. Much of what is preserved of Cantelli's work is in the form of broadcast recordings such as those presented here, often in less than perfect condition. But it is a remarkable legacy of superb musicianship that surely deserves wider exposure and recognition.

Broadcast from Studio 8H, New York, 15th January, 1949
Note that there was some variation in sound quality throughout the source material, particularly during the second half of this concert.
Pristine Audio XR remastering by Andrew Rose, July 2007 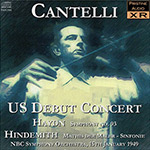 Guido Cantelli’s debut concert with the NBC Symphony, preserved here in this rare transcription disc, was a surprise to both New Yorkers in particular and the world in general. After hearing how Toscanini touted him as “sounding like me,” listeners no doubt expected super-intense, emotionally tumultuous readings with the same kind of extreme x-ray clarity. What they heard, however, is evidenced on this album: equal part balance yet within a softer tonal palette, a tendency to round off phrases that other conductors often slighted or drove too hard, and a cantabile quality that can still delight in spite of the dated sound.

The Haydn 93rd, so much lighter and more lyrical than his mentor’s approach to this composer, is greeted with polite applause, but his absolutely luminous reading of Paul Hindemith’s Mathis der Maler symphony obviously held the audience spellbound. All of the deep humanity of the music is there, and Cantelli even manages to imbue the somewhat sour passages with elegance and great depth of inner feeling. Toscanini is said to have understood this music for the first time after hearing Cantelli conduct it. I think that this audience on a chilly January night felt the glow, as well. Following the final peroration, they burst into a frenzy of applause to equal some of the ovations they gave Toscanini himself.

On the heels of his concert, RCA Victor rushed Cantelli and the orchestra into the recording studio to make commercial recordings of both works, and those recordings have been highly regarded by collectors since. (They were issued on a multi-disc set of Cantelli’s NBC recordings by Testament.) Yet there remains a shade more commitment, a shade more relaxation, in these live performances than there is on the RCA discs. It’s a close call; if you have the commercial recordings, you may choose to bypass this issue; but Cantelli completists will insist on it, and for those of us who do not own the Testament set, it is a fine souvenir of two of the conductor’s greatest achievements.

Andrew Rose of Pristine Classical had his work cut out for him in restoring this concert, particularly the Hindemith, which was recorded at a much softer volume, resulting in greater hiss and far less clarity. The mere fact that he was able to extract a listenable sound from these discs is wonder enough, but the highest compliment I can pay them is that they sound very much like the commercial recordings.