The order of movements in this recording was the subject of some controversy and criticism at its time of release, as Decca's LP appeared to reverse the order of the second and third movements. However there had long been differing opinions on the way the suite should be played in this regard, and Decca approached Sibelius himself for a definitive opinion on how the Suite should best be presented (although the earliest section of the work, The Swan of Tuonela dates from 1893, all four sections were later revised, including two as late as 1939), and that defined the order of this recording.

Four Legends from the Kalevala for Orchestra, Op. 22 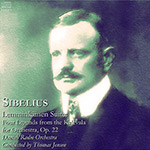