This recording, transcribed from acetate discs of unusually high quality, presents a truly remarkable document of Toscanini's mid-40's conducting, perhaps all the more so for being an all-Wagner concert, broadcast at the height of World War II. It responded excellently to the tonal rebalancing inherent in the XR process, bringing out a full-frequency tonal response, and my main work was in dealing with occasional radio interference and, at times, unpleasant surface noise. I'm pleased to report that these have been either eradicated or reduced to the extent that they no longer interrupt the listener as had previously been the case. I suspect these interruptions, which only the latest computer software is capable of succesfully tackling, may constitute one good reason why this excellent concert has not been heard in public since its first broadcast some 64 years ago. 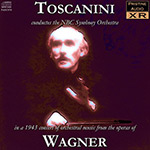