The Violin Concerto in D minor, opus 47 by Jean Sibelius premiered in 1903 in Helsinki. Sibelius withheld this version from publication and made substantial revisions. The new version premiered in 1906, in Berlin, with Richard Strauss conducting and Karl Halir as soloist (see the FMIC link). However, the work is dedicated to noted violinist Franz Von Vecsey. The initial version was noticeably more demanding on the virtuosic skills of the soloist and was revived in the early 1990s on the BIS record label by violinist Leonidas Kavakos, with the permission of Sibelius' heirs. The revised version still requires a considerably high level of technical facility on the part of the soloist. The Concerto is performed often today by major-league and minor-league violinists, is considered one of the most important vehicles, for any instrument. Although the work has been described as having "broad and depressing" melodies, the melodic line of the Sibelius Violin Concerto tells a very definite story. Several brighter moments appear against what is essentially a dark melodic backdrop, and the inexorable force that propels the Concerto's direction makes it irresistable.

Jascha Heifetz is generally considered to have resurrected the concerto, which he considered one of the great concertos in the violin repertoire. However, the 1987 recording of Cho-Liang Lin with Esa-Pekka Salonen and the Philharmonia Orchestra is considered one of the finest recordings of the work, although nearly every widely-known concertizing violinist has performed it regularly since Heifetz's so-called resurrection.

Like most concertos, the work is in three movements:

This is the only major work for solo instrument and orchestra (concerto) that Sibelius wrote, though he composed several other pieces for orchestra and solo instrument. One noteworthy feature of the work is the way in which an extended cadenza for the soloist takes on the role of the development section in the sonata form first movement. Donald Francis Tovey dubbed the final movement a polonaise for polar bears. Much of the violin writing is virtuosic, but even the most showy passages alternate with lyrical, melodic sections. The orchestral accompaniment of this concerto is generally very symphonic, completely departing from the often lighter, "rhythmic" accompaniments of many other concertos. The solo violin and all sections of the orchestra are equal players on the proverbial playing field.

The first movement, marked Allegro moderato, opens with a cushion of pianissimo strings pulsating gently. The soloist then enters with a characteristic IV-V-I phrase, in D minor G-A-D. The violin announces the theme and is echoed by clarinet briefly, then continues into developmental material. More low woodwind and timpani accompany the soloist in virtuosic runs. Almost cadenza-like arpeggios and double-stops and more runs are accompanied by more woodwind restatements of the theme. The strings then enter brazenly for the first time, announcing a second theme. Developmental material leads to a difficult cadenza which then opens into the recapitulation. The 'Allegro Molto Vivace' coda ends with restatements of past themes.

The second movement is lyrical. A short introduction by the full orchestra leads into a singing solo part over pizzicato strings. Beautifully dissonant accompaniments by the brass dominate the first part of the song-like movement. The remarkable middle section has the solo violin playing ascending broken octaves, with the flute as the main voice of the accompaniment, playing descending notes simultaneously.

The third movement opens with rhythmic percussion and the lower strings for four bars (playing eighth note-two sixteenth note figures), before the violin boldly enters with the first theme. This first section offers a complete display of violinistic gymnastics with up-bow staccato double-stops and a run with rapid string-crossing, then octaves, that leads into the first tutti. The second theme is taken up by the orchestra and is almost a waltz, and the violin takes up the same theme in variations, with arpeggios and double-stops. Another virtuosic semi-cadenza full of double-stops and runs returns the first theme to the violin, but is interrupted by more runs. Another orchestral interlude involves the violin as accompanist, as the solo part takes up a passage of harmonics. This precedes a sardonic passage of chords. Broken octaves and more virtuosic material keep the soloist busy while the orchestra takes care of the rising action. The violin leads us to the finish line with two ascending and descending D melodic minor scales, followed by a flourish of ascending sixteenth notes. The work ends with both the solo violin and the orchestra ending on a simple unison D. 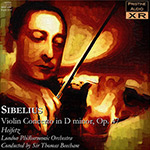