Prokofiev, one of the most talented, original and accomplished of modern composers, wrote this concerto in 1913. It is unquestionably the most consequential addition to violin literature since the Concerto of Sibelius. It has all the qualities of Prokofiev's music at its best - wit, charm, stylistic distinction, superbly polished surfaces.

Thus begins the sleevenotes which accompany Columbia's US album of 78s (M-244) from which this British recording was transcribed. Inaccuracies aside - it is generally accepted that the work was written in 1916-17 - it's certainly fascinating to see how a major record company set about selling what for many of its customers might have been considered a rather radical work even in the late 1930's. It's perhaps no surprise therefore that the following two paragraphs quickly extol the virtues of the performer as much as that of the work itself:

The vogue of the work dates from the memorable Prague International Festival of Contemporary Music when Szigeti's playing of it resulted in invitations from almost every conductor in Europe to introduce it in his particular series. Szigeti played it under Furtwängler, Bruno Walter, Malko, Ansermet, Fritz Reiner, and many other conductors in virtually every capital in Europe. Russia first heard it from Szigeti and it had to be encored in all performances in Leningrad, Moscow, Kharkov. Szigeti also played it in the United States with the New York Philharmonic, the Philadelphia and Boston Symphony Orchestras, and introduced it in Tokyo, Shanghai, Sydney and Melbourne.

Szigeti's mastery of the work has everywhere won him the highest praise. Some of the greatest teachers defer to his unsurpassable virtuosity as exemplified in his performance of the Prokofiev Concerto. Carl Flesch, in his encyclopedic work, The Art of Violin Playing, maintains that future generations will always identify the names of Prokofiev and Szigeti when speaking of the Concerto in D; they will see the work through his eyes and will consider his performance a standard difficult to equal, impossible to surpass. Prokofiev, who as the composer of the concerto is qualified to express the most authoritative opinion, has said: "Szigeti is the greatest interpreter of my Concerto."

There seems little point in trying to match Columbia's breathless enthusiasm for this recording in these notes, but of course I stand by everything they say, and whenever I think Prokofiev of course I think Szigeti...

But to be serious for a moment, it is certainly an excellent and authoritative reading, the recording iteself marred only by a slight tendency to distortion towards side ends, something which the extended frequency range of this XR restoration tends to expose more than most - one might consider it the occasional downside of revealing the wonderful tone of both soloist and orchestra, who we find in fine form, especially Szigeti.

I've chosen the second movement here as our example not because it is the shortest, nor because it exhibits less of the faults discernable elsewhere in this recording, but because it demonstrates better than either of the other movements the fine virtuosity and mastery of the soloist as well as the excellence of Beecham's orchestral accompaniment. 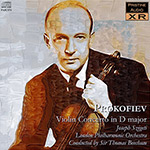