Weingartner's 1935 Vienna recording of the Choral Symphony is without doubt one of the highlights of the recorded canon. The Vienna Philharmonic Orchestra is showing all the signs both of its long heritage and also of becoming a well-disciplined modern orchestra in the new era of full orchestral recordings that began just ten years earlier with the first use of the microphone in the electrical recording method. The Vienna State Opera Choir is of course superb, as is the almost ideal quartet of soloists heard here.

Sonically this was without doubt a mid-1930s recording. Worse than that, the final movement was recorded separately and sounded completely different in its tonal balance to the rest of the recording. Here I've used the techniques behind the Pristine Audio Natural Sound method, for which this was the second recording to benefit, both to resurrect the overall sound quality, counteracting the multiple discrepancies introduced by 1930's recording methods, and also to bring the finale closer in tone to the rest of the recording. Now you will no longer feel a bit of a jolt as you move from the end of the third and into the fourth movements.

Not long after I had finished working on this recording, a task characterised normally by contemplating noise, hiss, crackles and clicks, I spent an hour of pure magic in the company of the Vienna Philharmonic under Felix Weingartner, my eyes shut, a winter fire glowing at my feet, marvelling at this wonderful recording and the new-found ability to, more accurately than ever, reproduce it for a new generation of listeners - as well as some who recall it from first time around... 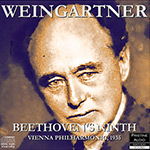 There is not doubt that, for me, the Weingartner Beethoven 9th Symphony is on the short list of forever great performances of that work. Fellow occupants include the Toscanini 1952 (not the 1939 in which Toscanini drives the music like the “Headless Horseman”), the 1942 Furtwangler (March 22, 1942, not the April 19, 1942 with the whole Nazi leadership in attendance), and the Klemperer Philharmonia (granite).

What now gives the Weingartner precedence is: (1) its incredible finale with the finest singers ever appearing in a recording of the 9th and (2) a recent breakthrough in recreative  processing that Pristine audio has applied to this 9th.

While the first three movements of the symphony are superbly balanced-form and expression-it is in the performance of the last movement, the choral finale, that I consider that Weingartner has trumped all rivals and created a benchmark that has not been reached yet for 72 years. I have never been completely convinced by the choral finale (please do not flog me too hard!!). I feel there are places where its seams show. It also appears to me that its soloists often put caterwauling brakes on the action.

With Weingartner, none of this happens. When the soloist sings out “Freude”, he drowns out everything. The four soloists intertwine into such beautiful and powerful quartets. They don’t hold up the action; they move it on. By his shaping, Weingartner knits all the seams together into a nearly perfect unit; he does not rush, but it seems that everything is going by so fast.

Now the sound. For about 25 years I had a miserable Columbia LP. For years afterward, I subsisted on a French recording, not bad, a bit murky, but at least it was a CD. Then Opus Kura, a Japanese outfit issued a really good-sounding reprocessing. I was very enthusiastic, even though there was considerable background noise, what a friend calls “the sound of eggs and bacon frying”. And now the Pristine Audio release. A different thing altogether. Silence. Sweet strings. Plangent brass. Round woodwinds. True tympani. Impossible to describe. Must be heard.

Let’s hope the Toscanini and Furtwangler are not far behind. But no matter with Pristine Audio does, the finale of the 9th belongs to Weingartner,