Toscanini's 1936 recording of Beethoven's Seventh Symphony is still regarded as perhaps its greatest recorded interpretation. Such is its fame and renown that there seems little point in adding anything here to what has already been said and written about it.

What has always let this recording down has been the abysmal sound of the original, and it was in attempting to see if anything could be done to even start to rectify this that I, somewhat inadvertently it has to be admitted, developed the ideas and techniques behind the Pristine Audio Natural Sound process, a radical re-equalisation of the recording which corrects multiple and extreme deficiencies in the tonal balance of the original recording.

The result, as described by Bill Rosen below, is fascinating, remarkable, frequently delightful, and just occasionally frustrating! For there are flaws in this recording beyond the reach of equalisation, de-clicking, noise reduction and so forth. Fortunately these are now relegated largely to the ranks of the occasional - peaks of distortion at some orchestral sforzandos, for example, and a kind of blurry high frequency background noise during loud sections. Nevertheless these are a small distraction at worst, especially when set against the enormous overall sonic gains made for this recording by this new process. 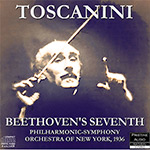 It’s so much better to have the near-real thing to enjoy and to be so much closer to that 1936 marvelous musical experience.

This performance was issued by RCA and was much collected in spite of its very low-fi sound, poor even for its time: airless, flat, shrill strings, faint woodwinds, blatty brass and limited frequency range. What Pristine Audio has done is rather hard to believe and even harder to describe. It is not just a reprocessing where rumble and noise and distortion is removed. There is air around all the instruments and there is some depth in the audio stage. The strings are sweet, not shrill. The woodwind are round. The brass are strong but they don’t blare. But even all that doesn’t describe it. The most exciting thing is that the frequency spectrum seems greatly enlarged. It is as if all the harmonics that couldn’t be captured by the 1936 recording equipment were restored! The recording now sounds like a good mono 1954 recording.

This is a mixed blessing to those of us who have learned to listen to the “telephone booth” acoustics of our historical recordings and to add the missing frequencies in our imagination. But, truthfully, it’s so much better to have the near-real thing to enjoy and to be so much closer to that 1936 marvelous musical experience.