Bruno Walter recorded Beethoven Pastoral Symphony three times in studio recordings, and this, the second of those, is perhaps the least well known. This is unfortunate as it is a particularly fine reading which surely deserves wider recognition. At least one eminent critic of historic recordings regards it as Walter's finest reading, and one of the great interpretations of this piece.

The recording here, one of the first to benefit from the Pristine Audio Natural Sound technique for correcting the equalisation of 78rpm recordings, was taken from a clean set of British Columbia pressings. I say clean advisedly - although the discs were in excellent condition, surface defects which I strongly suspect come from the master discs were present throughout most of the recording, and took an enormous amount of work to reduce or suppress without adversely harming the musical content. 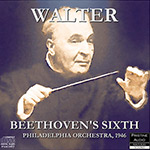