Recorded in the shadow of impending war in Europe, this remarkable recording of one of the great masters at work has never been heard to its full potential before now. Although several restorations of this recording have been issued, and are currently available to purchase, until now nobody has been able to res0lve the issue of the 78rpm final side.

The producer's note on the current Naxos issue states that a "...flaw in the original recording, however, could not be remedied: the second half of the Fourth’s finale was only ever issued in a sonically-compromised dubbing which sounds noticeably different from the rest of the symphony".

What this means for the listener when the sides are edited together is profound, as the side change comes at a point where it is impossible to mask a dramatic change in sound quality and acoustic, halfway through an orchestral 'tutti'. From there on in, the sound is dreadfully compromised.

It is this problem (after the others one expects in a recording of this vintage, including a persistent swish) that I have sought finally to rectify. By taking readings of the overall tonal balance of the final two sides, I've aimed to match the final side to the penultimate side. Getting a more pleasant sound for the final side was not too difficult, thanks to an ingenious piece of recent audio software, Har-Bal. Getting the two halves of the orchestral tutti to blend (one literally cuts off as the next begins - there is no overlap), proved much harder.

After many attempts I finally reached a result I was pleased with - you can hear the entire movement in our streaming sample on this page.

I then went a step further with the overall sound balance, in a quest to overcome general shortcomings in early microphones and recording equipment, by taking a modern recording of the 4th Symphony as a reference to further tweak the sound quality heard here and bring out the full-bodied tone of this excellent orchestra.

The result, surely, comes closer to what Toscanini would have heard and created in June 1939 than ever heard since, and this marvellous recording of Beethoven's wonderful Fourth Symphony can finally live again! 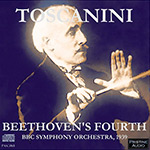