Music by JOSEF and JOHANN STRAUSS

When Clemens Krauss died in May 1954, his LP discography of works by the Strauss family was - shall we say - thin.  True, there were the complete Fledermaus and Zigeunerbaron operettas; and there were the three 'New Year' concerts; but beyond that there was but one other disc: LXT 2634 Overtures and Waltzes.  Never afraid to deal new hands from old decks, even on this full-price Decca release two of the four pieces were re-issues - both Overtures being taken from the recordings of the complete operettas.

To stretch sales further, by 1956 there were several MP (10") selections, and some of the LP discs were being re-issued with identical content but claiming improved sound quality from re-mastering.  One wonders how many enthusiasts of Krauss' interpretation of the Die Fledermaus overture were led into buying LXT2550-1, LW5005, LXT2695, LXT2634, LXT2576 (and there may have been others!), not realising that they were the identical dish, served on different plates.

A few months after Krauss' death another significant re-dealing by Decca came in the form of two full-price LPs and it is the second of these, LXT 2991, that forms our restoration and re-release.  It contains just six works - though each is substantial - with three (tracks 1, 2, and 6) by Johann (II),  and the remainder (tracks 3, 4, and 5) by Josef; and it mixes well-known items with a couple that are less familiar.

To help relate these recordings to their original LP releases, we have appended to each track title of our cue sheet a letter: thus (a), (b), (c) come from the three New Year concerts, and (d) is used for the one remaining track: the Zigeunerbaron overture.  As you might expect, the recording balance and quality varies track-to-track but the overall programme is a very enjoyable one.

(A minor item of terminology: the Decca discs use - as we have here - the phrase 'New Year' Concert  not New Year's Day Concert.  They are studio recordings that don't pretend to have been recorded - as would came later - at the live concert in Vienna on New Year's Day.  Any applause you hear will be that added by yourself after listening to these paramount performances by (in our opinion) the Strauss interpreter par excellence.) 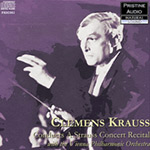