Mahler's Fourth Symphony, written 1899-1901 and first performed under the composer's baton in Munich in 1901, is perhaps the most immediately approachable of his symphonies. Scored for a more modestly proportioned orchestra than elsewhere in his repertoire, and with a pastoral innocence which can sometimes serve to mask dark shadows and undercurrents, it really is a most delightful work.

The finale, where we hear the soprano singing words from Des Knaben Wunderhorn (a collection of German folk poems dear to Mahler), was originally intended for his Third Symphony; instead it became the seed from which his fourth was to grow. Themes derived from the finale are heard through the first three movements, and yet are written in such a way as to successfully foreshadow that movement. In overall scale the Fourth Symphony is certainly more approachable than its immediate predecessor; its four movements run here to just over 55 minutes - contrast this with the hundred-minute, six movements of the Third.

This recording is remarkable in many ways. With regard to sound quality it is simply the most high fidelity recording I've ever heard from the 1930's. Recorded at a live concert (you'll hear the conductor's batton taps at the very start) onto 78rpm acetate discs, it has full frequency range and a huge dynamic range. Although subsequent playing and handling was to damage those discs, by careful, painstaking, and hugely time-consuming restoration work we have been able to restore sections of the recording previously lost under surface noise to something approaching their former glory. We have also tackled some of the sonic inadequacies of the microphones of the day to restore a more even tonal balance to the recording. The net result is quite astonishing to hear - as clean and clear as it must have sounded to the audience at the Concertgebouw in November 1939.

Secondly we have to look to the performance, as this is one which is simply unique. Mangelberg had been a close friend and associate of Mahler's; he had been present at the premiere of this symphony; the two conductors (for conducting was for what Mahler was chiefly known during his lifetime) worked on the score together, adding timing marks, annotations and fine detailed notes throughout.

We cannot know how Mahler paced the work, how he handled the phrasing, or whether Mengelberg's interpretation is even close to that of Mahler. Some will find his almost ceaseless tempo changes impossible to take (and hence we have no review from Bill Rosen!); for others here is a whole new insight into this marvellous piece of music which will both delight and inform at the same time. Personally, I love it!

MAHLER Symphony No. 4 in G major 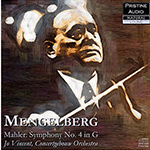