Mendelssohn travelled widely throughout his life - indeed it was partly exhaustion due to overwork and too much travelling which accelerated his early death - and the 'Italian' Symphony is testament to that travel. Begun on a visit to Italy, it was completed in Berlin as a result of a commission from the London Philharmonic Society to compose "a symphony, an overture and a vocal piece" for 100 guineas that he'd received in November 1832.

Although at that point he was having acute misgivings about the work, he carried on with it and by its completion the following April was satisfied with what he'd done. He took it with him to London on a visit beginning the end of that month, and the work was premiered by the Philharmonic Society at a concert given on 13th May - shortly before dashing off back to Germany to conduct at a music festival in Dusseldorf which began just 13 days later.

The Symphony, published posthumously as Op. 90, is generally regarded as one of his most successful orchestral works. Mendelssohn had intended to continue revising it prior to publication - instead what we have is a work of great spontaneity and originality, often delicately and openly scored, and entirely musically satisfying. Indeed, it's hard to see what revision he might have made which could further improve it, beyond perhaps some minor tinkering around the edges. This was the still-youthful composer at full command of his compositional powers, apparently bursting with musical ideas. Though he was never to lose his skills, some critics felt that later works began to lack the level of inventiveness he showed earlier in this life - there can certainly be no criticism of that here. 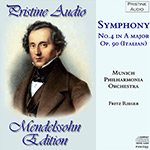 Felix Mendelssohn has always been something of a puzzle to me. I consider him the greatest of all music prodigies. The Octet at 16 and the Overture to a Midsummer Nights Dream at 17 are surely the greatest music ever written by a teenager. Yet the questions have always been asked: “Did he fulfill his brilliant promise? And “Why is his later work so uneven in quality?” Hans von Bulow wittily said that Mendelssohn started out as a great genius and ended up as a promising talent. That this bon mot is not entirely true is evidenced by some of the great works Mendelssohn wrote as an adult: the “Scotch Symphony”, the Violin Concerto, the remainder of the Midsummer Night’s Dream incidental music and the “Italian Symphony”, the work at hand. The English also show an excessive fondness for the oratorio “Elijah”.

The conductor in this recording, Fritz Rieger, is barely remembered for his conducting of Fischer-Dieskau in one of the great song cycles of the 20th century, “Lebendig Begraben” (Buried Alive) by the Swiss composer, Othmar Schoek. The evidence from this performance is that he is a superior conductor, more classically than romantically oriented.

He begins the first movement at a moderate tempo, downplaying the brilliance of the strings somewhat and bringing out the woodwinds and brass. There is excellent tension and continuity throughout, not just in the brilliant bits. He does not take the exposition repeat which denies us of about 20 measures of fine transition to the beginning. In the development the tension never flags and Rieger knows where the real climaxes are. The transition to the recapitulation is breathtaking, creating in us a yearning for the great opening theme. The second theme is clothed in rich strings and the ending is very exciting.

The second movement is more measured and somber than I am used to, but full of incident. The third movement is subdued and a bit sad and seems more Scotch than Italian.

The final movement is taken at a moderate tempo with great wind articulation. The playing and conducting are brilliant throughout and bring the symphony to an emotionally satisfying conclusion. Somehow, played this way, the symphony seems more substantial than usual when it is played primarily for brilliance. The sound is, like the performance, more substantial than brilliant.