Belgian composer Henri Vieuxtemps (1820-1881) was reknowned throughout his lifetime as one of the greatest virtuouso violinists of all time. He was acclaimed as a boy by Schumann, who compared him to Paganini (whom he met in 1834 at his London debut).

He wrote seven violin concertos, plus two for cello, various other works for violin and orchestra, and a range of chamber music, though it is for those seven violin concertos that he will be best remembered. Although they require great virtousity of the soloist, they are not merely empty displays of technical brilliance - there is greater depth and dimension to the works which put them on a higher musical level than, for example, those of Paganini.

Of the seven concertos, it is the fifth., written 1858-9, with its attractive melodies and colourful virtousity and orchestration, which continues to attract performers. Here we have one of the twentieth century's greatest violinist putting his unique stamp on the work in a 1947 HMV recording which has a particularly attractive sound quality for its day.

The piece is on the short side, with movements virtually continuous, the cadenza linking the first and second movements and the work ending with a very short Allegro con fuoco. We have chosen to follow the original HMV label markings and include the cadenza at the beginning of the second movement, rather than at the end of the first - given the lack of pauses the distinction is somewhat academic.

Thus the almost unbelievable brilliance of Vieuxtemp's cadenza can be heard at the beginning of our sample movement - there are moments here where Heifetz appears to be playing at least two instruments simultaneously, using four arms! This brilliant section appears at the start of the third side, and was taken entirely from the first take...

VIEUXTEMPS Violin Concerto No. 5 in A minor, Op. 37 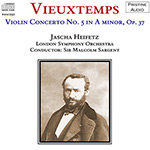 The Vieuxtemps shows him at his stellar best

Vieuxtemps was one of those nineteenth century musical figures that no longer exist--the virtuoso instrumentalist composer. Like Paganini and Wieniawski, he was a great violin vituoso who also composed music, primarily for his own use. He made his debut at six years old, playing a concerto with orchestra (by Bode). He was so accomplished that Schumann compared him to Paganini. He wrote seven violin concertos; the 4th and 5th are generally considered his finest.

The 5th concerto is, frankly, rather small beer which Heifetz turns into champagne. It has a one-movement structure divided into a long opening allegro, a cadenza, a brief adagio and a tiny finale lasting one minute. It is not highly virtuistic by Paganini standards, no does it rise to the quality of Wieniawsky. Still, it is pleasant and quite a vehicle for Heifetz.

What is left to say about Heifetz? Surely, in spite of the claims of Kreisler, Szigeti and Milstein, he is the greatest violinist of the 20th century. The Vieuxtemps shows him at his stellar best. His first entrance displays that brilliant, rock solid, tone, always pulsating with forward drive, yet never tense. The second theme is sung so beautifully. There is effortless virtuosity that does not call attention to itself and eloquence in the slow movement.

One thinks of Heifetz' many recordings; this one must rank high in the canon.

The restoration highlights Heifetz' magnificent tone, but allows the orchestra plenty of presence.