Debussy's Jeux, written in 1912 as a short ballet for Diaghilev, suffered the unfortunate fate of being first staged just two weeks prior to Stravinsky's The Rite of Spring, one of the most notorious première 'event's in the history of classical music. Given its dense structure, lack of repetitions and forward-looking use of harmony, it is perhaps a piece which rewards repeated listening, especially in an audience unused to such music.

Alas, Jeux quietly disappeared, and was not really given much attention again until this recording, its premiere, was made in 1947, and received the coveted double-stars of The Record Guide in 1952. Its conductor, the brilliant de Sabata, regarded this as the favourite of his relatively few recordings - he was far happier in the concert hall than the studio.

Michael Steinberg's excellent program notes on the genesis of Jeux for the San Francisco Symphony website are particularly illuminating, especially as they explain how the original ideas sketched by Nijinsky at a lunch at the Savoy Hotel, London (including the rejected ideas that the dancers would be three male lovers, and that a plane would crash in the background), were developed into the synopsis given to the audience on the opening night:

I restored this music from a pair of near-mint shellac discs, and it seems to me that this is one of the most technically advanced 78rpm recordings ever made. It would be some 20 months after this recording was made that HMV started to use tape technology, so here we have work from the very final days of regular direct-to-disc recording at 78rpm.

Although Decca were keen to trumpet their ffrr system in their advertising and on labels, beginning about a year after they'd started using it in 1945, HMV stayed quiet about similar advances they'd made at about the same time, presumeably so as not to harm sales of older recordings. (In a similar, apparently backward-looking move, they came into the LP era some two years after their main competitors, despite the obvious advantages of the new medium.)

From a technical perspective, there is no reason why a wide-grooved disc rotating at a relatively high speed should not be able to deliver superior results to that of a microgroove record turning far more slowly. It is mainly the medium of shellac itself, and its high surface noise, which causes the greatest problems with material such as this.

Coupled with the short playing time of 78s and their demise became inevitable in the face of tape and vinyl, but there's little doubt in my mind of the technical superiority 0f many aspects of this recording over a good deal of early vinyl material. Here we have a frequency range that stretches right up to 20kHz, very little discernable wow and flutter, and after noise reduction processing, an incredible signal to noise ratio of almost 60dB!

Ironically much of this stems from a technique of cutting the master recording directly, without the possibility of edits or the sonic degradation of analogue dubs and copying, to which some record companies would return in the latter days of the LP as part of a drive to improve sound quality on vinyl...

Because of the exceptional quality of this recording we have chosen to encode our MP3 files at the same ultra-high resolution used for our vinyl transfers to ensure optimum reproduction. 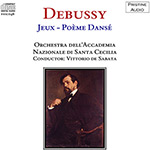 Jeux is Debussy's final and most neglected orchestral masterpiece. One reason for the neglect is that this Mt. Everest of musical abstraction was actually presented as a Diaghilev ballet (1913) with a trivial wisp of a story involving two female tennis players vying for the same male, where the fall of the tennis balls signal the key points in the structure. The second reason is that this music is profoundly new, a far advance beyond La Mer and Images. It is a subtle, interconnected web of musical tissue with motives appearing, developing and transforming without borders or boundaries, always coruscatingly beautiful. Very few performances have been able to maintain this constant motion and slowly growing tension without premature anticlimax or without getting beached in a tensionless sandbar.

In my opinion, only three conductors have really gotten Jeux right: Haitink (Philips), Boulez (DG) and now De Sabata (Pristine Audio). If anything De Sabata brings an added passion to Jeux that makes it so very much more sensual and less evanescent without losing any of the clarity of Boulez or the poise of Haitink. Never was I more aware of the human yearning below the shifting textures of Jeux. The urgency of De Sabata's last three minutes followed by the final evaporation cannot be matched by the other two.

The sonic work on the 1947 pressings of Jeux will surely rank with Pristine Audio's finest work. The sweetness of the strings, the clarity of the woodwinds, the fullness of the bass, and the lack of a hint of harshness or glassiness banishes any desire for stereo.