The Piano Concerto in G Minor was the first of the three concertos that Dvorák composed, and is by far the least known. It is usually dismissed as "second-rate" and remains the poor orphan of his major works. Such phrases as "a concerto for two right hands", "flaccid", and "botched" have been used by its critics - of whom there have been many. As recently as 1943, Alec Robertson, a British critic who patently adored Dvorak, bad-mouthed the concerto like this:

"Over this score might well be written 'a warning to young composers. The piano passage-work sounds as if Dvorak had... weighed out his ingredients fairly accurately, but mixed them with the heavy hand of an inexpert cook."

Hmm. Perhaps we should judge for ourselves.

Composed in about six weeks of 1876, one of the the young composer's goals was to help consolidate his position in the musical establishment with a major concerto for a reputed soloist, and this was achieved with its first performance by the pianist Karel Slavkovský in 1878. It was a period in which Dvorak's international reputation blossomed.

Dvorak, however, seems to have been unsatisfied with the work and, as his compositional style developed, continued to revise and improve it until the publication of the score in 1883. Nor was this the end of the story: the pianist Vilem Kurz made several stylistic changes to the solo part, particularly by using octave doubling (a la Liszt) to give a greater depth to the melodic line.

Which brings us to Rudolf Firkusný. If such a work ever needed a champion this one found it in Firkusny. And what a champion! A native Czech, he had studied with Janácek, Josef Suk, Cortot and Schnabel. Settled in the United States, almost single-handedly he resurrected the concerto (and made his own revisions to the piano part!). Four studio recordings by him were released, plus two others taken from radio broadcasts.

The first of the Firkusny recordings, made on the 9th and 11th April 1954, shows a freshness of approach coupled with the fervency of an advocate, and Firkusny was ideally partnered - and, you might say, tempered - by the characteristically disciplined conducting of George Szell and his Cleveland orchestra.

As happened too often, the advent of stereo in 1958 pushed companies to concentrate on the new format and to re-examine their catalogues, and this monophonic version soon went into the archives. Although reviewers have commented that none of Firkusny's later recordings matched its performance it has, as far as we can tell, been unavailable since then.

In the mid-1950s, the American Columbia company's catalogue was distributed in Europe by Philips, and we were fortunate enough to have a mint test pressing of the Philips disk available for our restoration. Although it has the characteristics of seemingly all Columbia recordings in the Severance Hall of that vintage (thin string tone being one), we think it's come up remarkably well.

And, to return to where we began, what about the music? Well... Listen to the second movement, with its deep serenity, its pre-echos of the slow movement of the New World symphony (written fifteen years later); to the third characteristically Dvorakian movement with its folksy themes; and if this is "second rate" Dvorak one can only sympathise with the many "first-rate" composers who could never match it! 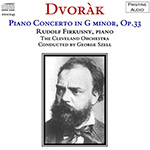