Albert Sammons and Lionel Tertis were the foremost British violinist and violist of their day - indeed Tertis is regarded widely as the father of modern viola playing. Their pairing here, together with Harty's masterly direction of the then newly-formed London Philharmonic Orchestra, is frequently sublime.

Clearly, even nearly 20 years later, this world première recording was standing the test of time, and yet now perhaps it could be seen at times as an historic anomaly. It's certainly not historically informed - the heavy romanticism of the playing as hardly what is now seen as appropriate for Mozart; Tertis' lengthy self-composed cadenza seems almost bizarre in this context.

And yet, remarkably, the magic does still work. The recording quality is excellent, our source discs were quiet and well-preserved, and it's a recording I come back to over and over again for listening pleasure. Times change, performance practises change, but you can't deny a wonderful performance such as this its place in the history of recorded music. 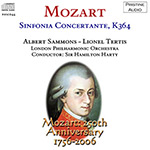 Played by the soloists with such limpid grace

A very alert orchestra enters with a performance whose sound appears like very good mid-1950's monaural. The crispness and lightness of Sir Hamilton's lines mark him as a real Mozartean. I was put off briefly by the soloists who enter in a rather mannered and romantic fashion and slow down the proceedings. After a few moments, everything settles down and I enjoyed a very good romantic, if not great classic performance, of the first movement. The ensembles between Sammons (whose performance of the Elgar concerto, in my opinion, tops even that of Menuhin) and Tertis is quite remarkable. This is especially apparent in the cadenza to which they add some rather anachronistic and non-Mozartean touches.

Unexpectedly, the slow movement is restrained, delicate and very classic. At rather flowing speeds, it is extremely eloquent. Tertis' deep-throated viola echoes Sammon's sweet violin in one of the greatest performance of this movement I've ever heard.

Dash and brio characterize the finale. The second theme is played by the soloists with such limpid grace. The orchestra ends the work with glorious panache.

Not without flaws, but memorable and with beautiful sound.