When disc2disk's Peter Harrison, our vinyl transfer wizard, began work on restoring these recordings, we had little idea of their effective rarity. For although Sir Adrian Boult's career as a conductor was long and prolific, he rarely ventured into the recording studio with the music of Tchaikovsky in his hands. Of those recordings he did make, not one is currently available in the British CD catalogue - until now of course!

Why this should be we do not know - for such a major composer as Tchaikovsky to have been effectively sidelined by one of the twentieth centuries greatest conductors, a man who embraced the Romantic reportoire so brilliantly, is something of a mystery.

Here we have his 1952 Decca recording of a very well-known work, the 1812 Overture, one of only two recordings of this piece by Boult we've thus far been able to trace (a second was made about fourteen years later), and also a far less well-known work.

I shall leave the story of the 1812 to one side and look instead at the Hamlet Fantasy Overture:

The Decca sleevenotes to their 1952 release noted that "the overture is a fine quasi-symphonic poem which until recently has been shamefully neglected in England" - a neglect which seems to have continued to this day, with very few modern recordings in existence in the current catalogue. Originally written in 1888 with the intention of being a prelude to incidental music for a production of the Shakespeare play - the French actor Lucien Guitry agreed to play the lead role in Russia if Tchaikovsky would write incidental music - the piece soon took on a life and dimension of its own, more suited to the concert hall than as an introduction to the play. In the end another, shorter and simplified version of this piece was provided for the production, together with sixteen other numbers, none of them considered particularly notable.

It is suggested of "Hamlet - Fantasy Overture" that one does not look to the music for scenes or a precise programmme - more that it is "a study in moods and emotions". Saying that, one can identify certain moments from the play in the music, in particular the march suggesting the arrival of Fortinbras and the concluding funeral march.

The sound quality, as always when Peter's transcribing from Decca vinyl, is superb - but in this case he goes a step further and heralds this as his greatest remastering work to date. I think you might just agree... 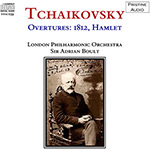