The March 2006 issue of The Gramophone magazine printed a letter from Phillip Arnold of Staffordshire, England, which read:

When I read this letter I was immediately intrigued to hear the recording - to describe it as "one of the great recordings of the 20th century" is strong stuff indeed! It also struck me that here was an ideal opportunity to use the power of the Internet to bring this recording back to life in double-quick time - in time even to get a reply published in the following issue.

First step was a search for discs to work from, to which we are indebted to Watson Records of Dundee for their helpful and efficient manner - and of course the discs involved. I'm pleased to say that they have also located further records by Kathleen Long which will be appearing here in the months to come.

From then on it was a matter of bringing this beauty back to life - not until I was sure that it would be possible did I confirm with editor of The Gramophone that this would be going ahead in time for their April issue - better to get it right than to rush it out. One problem surfaced late in the day - a variable wow on the Ballade left the piano at times sounding a little wavery. Here I adopted the methods used so succesfully by my colleague Peter Harrison for our César Franck Piano Quintet release to digitally de-wow the recording by degrees varying from 0.08 semitones at the start to 0.15 semitones at the end of the recording - minute amounts, but when you know they're their you can hear them and they do become an itch you have to scratch!

(At this point I should point out that the record itself was a perfectly centred pressing - the slight pitch variation could only have some from the mastering stage and was not apparent on the Ace of Clubs issue.)

So here it is, some 53 years after its original release, and sounding perhaps better than it ever has done. We are now in the process of remastering more of those rare early Decca LPs to continue a Kathleen Long series, including works by Fauré, Schumann and Scarlatti. We hope you enjoy this fabulous recording, and thank The Gramophone and Mr. Arnold for bringing it to our attention. 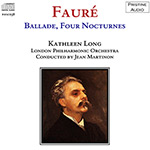