Massenet is perhaps one of those unfortunate composers destined to be known cheifly for one work - in his case the opera Manon - despite having been one of the more prolific French opera composers. As Decca's original sleevenotes for this recording pointed out:

Well that was the status quo in 1952. Alas it seems that Massenet's flame burns even dimmer some 54 years later - a check in The Gramophone catalogues of the 1950s against 2005 reveals even fewer recordings of the ballet music currently on the catalogue than in the earliest days of the LP.

This is a huge shame, for this music is exactly as those sleevenotes describe, and surely deserves greater airing. Take a listen to our example below, the opening part of seven, entitled "Castillane", a lively dance in 6/8 time bedecked with castanets evoking a real Spanish fiesta.

The opera, premièred in Paris on 30th November, 1885, is set in 12th century Spain, and based on a tragedy written by the French author Piere Corneille about at famous knight and warrior of the time known as "Le Cid". Of the four acts, the ballet comes in the second scene of Act 2, set on a fine spring day as a cast of townspeople, peasants and young engaged couples are celebrating in the Great Square of Burgos with a series of dances from the provinces of Spain.

Take a listen closely too, and you'll hear the fine art of Peter Harrison's immaculate remastering work, surely a masterpiece in its own right. Any sense of this coming from "an old record" is entirely lost as the magic of this musical performance is brought shining through. 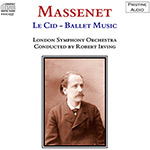 It is really very, very good

I don't much care for Massenet. In spite of his gifts of melody, it seems to me that he shrinks everything down to the size of the French 19th century bourgeoisie, whose paramerters are: a good but small gain at the bourse, a good look up the skirt of the girl who brings coffee, a good nap through the cure's sermon and a good heavy Sunday afternoon meal. Even in El Cid, which is an opera about the great Spanish warrior who stopped the advance of the Moors, Massenet plays down the drama of the encounter and is only mildly exciting in the love scenes.

But something happened to him in the ballet music. It is really very, very good. Perhaps, like many French composers, the proximity to Spain gave him some fresh inspiration. There are many good tunes and exciting rhythms and the piece never flags. Some of this is no doubt due to Robert Irving, a great ballet conductor. Much is due to the very clear, undistorted sonics achieved by Pristine Audio. If you want an uncomplicated 35 minutes full of charming incident and melody, this will do quite well.

Is Massenet off my bad list? By no means. Anyone who could write the "Meditation" from "Thais" has much to answer for.