The sharper students of the music of Mozart reading this page might already be preparing themselves to fire off e-mails of correction. "Surely," they would write, "Mozart wrote five Violin Concertos - how can you be possibly offering his seventh?"

(Mind you, as a former music student myself I'd say that as a breed they're rarely to be trusted on matters of precision, especially where counting is concerned!)

There is certainly a strong case to be made here - yet back in 1932 the received wisdom was that this was indeed one of seven Mozart Concertos for Violin and Orchestra, and that is precisely how it was presented by HMV in this recording by the then 16-year-old Menuhin.

I don't propose to go into the full story of this concerto - suffice to say that the general opinion these days is that if Mozart did have a hand in the writing of it, he may not have been the only one. I would however direct the curious-minded to an excellent and informative article by Dennis Pajot which can be read online at the Mozart Forum website here.

From a technical point this recording suffered from what I'm beginning to think was the sound qualities (or rather, the lack of them!) of a particular microphone in all-too-common use in the 1930's. I've heard it elsewhere on music I've restored for Pristine Audio - most clearly in the 1932 Schnabel Emperor Concerto and the 1935 Liszt Faust Symphony recordings - and it takes some rectifying!

Alas the sound will always remain a little primitive, although it is now is a hugely-improved condition such that one can quickly adjust to it and thus enjoy the performance of a particularly rare and little-known piece that might just be by Mozart - in the hands of one of the most brilliant violin players of all time!


*NB. George Enescu was known in France as Georges Enesco - it is this spelling which is found on the original HMV discs, hence our use of it in this instance. 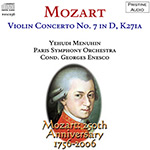