Carl Nielsen (1865-1931), the greatest composer to come out of Denmark, stands alongside Sibelius as the great masters of Scandinavian composition. Like his Finnish contemporary, Nielsen's great body of work lies in his symphonies. Of these, this is the sixth and last, written in the years 1924-5. As with Sibelius, he developed his own notions of structure and tonality that, as his work progressed, became more entirely individual and unorthodox.

However at the time of this recording the jury was still firmly out on his Sixth Symphony - indeed although a number of contemporary symphony recordings by the Danish State Radio Orchestra were released in the UK, this recording was not. The following explanation and description (for curious readers, no doubt) appeared in 1956's The Record Guide:

"...the Sixth Symphony is a somewhat enigmatic work about which even Danish musicians are by no means agreed. A spacious and impressive first movement is followed by a sarcastic Humoreske, which sounds like a parody of the neo-classical Stravinsky at his thinnest, interrupted by downard glissando yawns on the trombone; then comes a slow movement which begins nobly but peters out; finally a set of variations in which sardonic humour is interspersed with a good deal of melodic charm. It is a puzzling work... the probability is that, if Nielsen had not died in his sixties, we should be thinking of it as a transitional work pointing the way to further symphonic achievements; and in fact it was it was followed by the two important and original wind concertos and by the organ Commotio and Three Motets. A fairly good recording of the Sixth Symphony, conducted by Thomas Jensen, is available in Denmark (Tono) and in America (Mercury); but this has not yet been issued in England."

This certainly is an interesting yet enigmatic work - and in a recording that is well worth hearing, especially following the efforts of Peter Harrison in restoring it to show a clean, vibrant, sparkling intensity.

Transfer and restoration by Peter Harrison 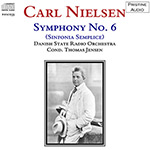 Jensen drinks the ironic cup to the full

How is one to approach this very enigmatic work? Carl Nielsen, having written two of the greatest and most life-enhancing symphonies of the 20th century (#4-"The Inextinguishable" [1916] and #5 [1922]) now writes a very bitter and ironic work to finish his symphonic oeuvre. There may be reasons. He has suffered a series of heart problems in the 1920's. More importantly, he feels betrayed by the relative lack of recognition he has received in Denmark and internationally compared to his compatriot Sibelius who has been showered with honors and money. Although Nielsen's 60th birthday (1925) was well-celebrated in Denmark and his opera Maskerade is the Danish national opera, he writes in the late 1920's that he wishes that he had taken up another profession and that he has never been able to make a living from his compositions. Finally, in 1928, Nielsen writes the only Clarinet Concerto worthy to rank with Mozart's, yet it is a work of such surpassing bitterness and gall that one cannot tolerate hearing it too often.

The first movement of the sixth symphony begins sweetly but coldly and the entire first movement alternates between simplicity and irony -a great piece of music. The second movement is a short wind-driven humoreske leading to a beautiful "proposta seria" for strings. The final movement is a set of utterly diverse variations-lamenting, waltzing, brutal and ultimately ironic. Jensen, who recorded most of the Nielsen symphonies in the early 1950's during the first intense but short-lived burst of Nielsen interest after WWII, drinks the ironic cup to the full. Even more than the newer Blomstedt, which is very good, Jensen brings out the contradictory sides of this symphony.

The Danacord 1994 remastering of the Jensen 1952 performance was pretty good, but has been considerably bested by the Pristine Audio remastering, especially in the areas of dynamic range and presence.