There is no doubt that music ran in the blood of the Bach family. Johann Sebastian Bach, stands as one of the towering musical geniuses of all time, whilst his second son, Carl Philipp Emanuel inherited probably the largest share of his father's talent.

Here we offer the listener an opportunity to sample these two composers side-by-side in very similar circumstances - double concertos for two keyboards and orchestra. J.S. uses strings alone in his orchestration, whereas C.P.E. employs a slightly fuller orchestra, with the addition of two horns and two flutes.

Despite this being a father and son operation, the two works are separated by a full sixty years - the earlier work was written for a performance in Leipzig in 1729 and is firmly rooted in the Baroque era, whilst the latter, one of C.P.E. Bach's last works, was written in Hamburg in 1788, and sits astride the Roccoco and early Classical schools.

In these recordings, both rated with maximum double-stars in the British fifties collector's bible, The Record Guide, the instruments used are contemporary instruments based on a 1778 harpsichord by Kirkman and a Stein fortepiano commonly in use in the period 1770-90 and highly praised by Mozart.

This superb restoration by Peter Harrison brings out what the aforementioned Record Guide describes as "A delicious work in the galant manner, which delightfully pits against each other the dying harpsichord and the new-born forte-piano" beautifully.

Those with a keen ear will note the sudden drops to extreme silence between movements - this is not some trick on the restorer's part to try and reduce hiss from the original taped recording, but is in fact how the record was released; what remains between movements is what little is left of the vinyl surface noise after processing and remastering. Although there is a temptation in circumstances like this to generate tape hiss artificially to create a "bridge" between movements, we have preferred to be true to the original recording. 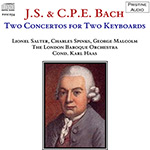 The humanity, the deep joy, the spirituality gets to me

This recording fascinates for several reasons. First it shows that well before the "original instruments" movement of the late 1960's, Bach was played with great musical taste, informed intelligence and love. Second the contrast between the styles of Bach senior and his most famous son is very great and merits some discussion.

The performance of Bach senior may seem a bit slow, used as we are to the jog trotting of Andrew Parrott and Trevor Pinnock. But the performance really grows on you! The humanity, the deep joy, the spirituality gets to me. The insouciance and devil-may-care of Bach junior makes one want to laugh aloud.

Carl Phillip was a dutiful son who made his father very proud as he became court composer to Frederick the Great. He also played a major role in creating the rococo, galant style which utterly destroyed his father's style well before his father's death and helped bury his name except as a pedagogue for 75 years. One wonders how Bach's sons can have been so little touched by their father's work.

Hearing the two works in such a beautiful remastering, with the son we enjoy a delightful party; whereas the father gives us a brief glimpse of eternity.