Beethoven's Second Symphony is one of the lesser-known members of what is perhaps the most famous canon of orchestral music ever written. First performed on 5th April, 1803, as the composer started to realise he was going deaf, and yet without knowing he was on the threshold of his career, it has all too often been overshadowed by the symphonies which were to follow.

And yet it is a work of great beauty and optimism, despite the composer's huge despair - he had also been rebuffed by the young Countess Giulietta Guicciardi in love. In this performance - double-starred in The Record Guide of 1956, which describes it as "the best version of the Second Symphony that has so far appeared" - you can truly find the magic inherent in Beethoven's greatest music.

Schuricht's conducting is both lively and elegant, and the Vienna Philharmonic respond with relaxed grace as well as vitality and the highest playing standards, all superbly captured by the Decca recording engineers and brought to you by the expert restorative skills of Peter Harrison. 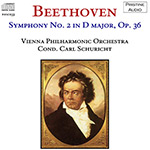