Liszt's monumental Faust Symphony, written between 1854 and 1857, ranks among his finest music. Writing in Opera News in 1999, Arlo McKinnon states: "Franz Liszt's Faust Symphony is one of the most significant yet (in our time) least appreciated orchestral works of the nineteenth century. Written at the urging of Hector Berlioz, the quasi-autobiographical Faust Symphony is Liszt's largest and greatest symphonic utterance, the bridge between Beethoven's Ninth and Mahler's Resurrection Symphony.

"Without sinking into mere pictorialism, the Faust Symphony advances the concept of programmatic music, marking the path to the great tone poems of Richard Strauss. Its wildly original orchestration clearly had a major influence on Debussy, and in the Méphistophélès movement one hears sounds prescient of early Stravinsky ballets. The Faust Symphony is a tour de force of nineteenth-century harmonic practice, and its motivic construction influenced Wagner. Its opening motif, utilizing all twelve tones, foreshadows the early works of Schoenberg."

The recording presented here, a somewhat abridged fifty-five minutes long, was the first 'full-length' recording of the symphony, made in Paris in 1935 and credited to the "Grand Orchestre Philharmonique" in the style of many recordings of the day. Reviewing a Beecham recording of the same piece, Jeffrey Liscomb writes: "The finest Faust Symphony ever recorded has sadly never been transferred to CD. That was the version by Selmar Meyrowitz (1875-1941) with the Paris Philharmonic (last available on Vox LP 6920). For passion and subtle nuance, Meyrowitz was simply in a class of his own. Virtually his only recording on CD can be heard in Telefunken's "A Johann Strauss Celebration," where Meyrowitz conducts a superb Emperor Waltz. The tenor soloist in his Faust Symphony was the great Georges Jouatte (old-timers will remember his superlative performance in Fournet's recording of the Berlioz Requiem).

"Beecham was magnificent in his "live" recording of the Berlioz Requiem (see my review) and in a host of other works, but his Liszt here suffers from an excess of polite restraint (I am weeding my copy). Hopefully, the Meyrowitz recording will someday appear on CD. Save for its elderly mono sound, once heard the Meyrowitz is likely the only version you'll ever want to hear again."

Well hopefully Mr Liscomb will enjoy this release as much as I did whilst easing out of it's "elderly" sound from what were excellent, clean copies of the original Pathé 78rpm discs!

Those who have not heard of the conductor Selmar Meyrowitz here before are excused - he was killed during the Second World War whilst trying to escape the Nazis - a tragic end to a blossoming career... 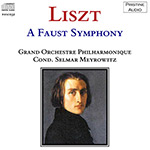 So stunning that it outshines both recordings by Leonard Bernstein

Franz Liszt's place in music is difficult to assess. He was considered by most 19th century musicians to be the greatest of all piano virtuosos. His transcriptions of other composers' music was both selfless and brilliant and allowed many musiclovers to hear works that they would never have heard in a concert hall. He was an outstanding conductor and premiered many works of Berlioz and Wagner. But ultimately, Liszt's reputation must rest on his compositions and here the record is very uncertain. Liszt was an incredibly prolific piano composer and he wrote many works for organ, chorus and orchestra. But he wrote just a few great masterpieces such as the Sonata in B Minor, God's Benediction in the Silence, the Dante Sonata and the work which is the subject of this review: the Faust Symphony.

This magnificent work is in three movements: the first depicting Faust in his despair as an old, disillusioned man and as a dynamic, powerful one after he sells his soul to the devil--Mephistopheles. The second movement is a picture of Marguerite, a simple girl whom Faust seduces, makes pregnant and tries to save after she has killed her child. The final movement--one of the great masterpieces of the 19th century--represents Mephistopheles. Liszt's genius sees Mephistopheles as unable to create and thus the movement introduces no new themes but brilliantly distorts those from the first two movements. Like the modern public, the 19th century demanded a happy ending and there is a short, vapid chorus that ends the work, but doesn't spoil it.

The performance by Selmar Meyrowitz is so stunning that it outshines both recordings by Leonard Bernstein. The deep spirit of the work is present in every note the 1935 French orchestra plays. The first movement is held together with an iron fist; there is no showing off, but the performance has incredible panache. The final coda gives a tremendous sense of a rounded picture. For the only time I can recall, the Marguerite movement is not an anti-climax; it is urgent though lyrical; there are no longeurs. None of this can prepare one for the performance of the third movement. From the opening chords, Meyrowitz pours out such brilliance, mordant wit and diablerie that one finally understands the power of the devil. Even the end chorus seems carried by the momentum. I know nothing of Selmar Meyrowitz, but I shall not forget his name.

I can only say that the sound was at one with the performance; perhaps there was also some soul-selling to obtain such glorious tone from 1935 78's.

I am sometimes asked why I listen to historical recordings. The answer, as this recording shows, is that the richness of the European Classical tradition, now forever gone from us, still lies buried in them.