This recording, originally released in conjunction with Haydn's Symphony No. 100 by Decca in 1954, appears to have suffered the same fate as many superb recordings of the early 1950's: it disappeared not long after the introduction of stereo, and has not been seen since - until now.

Many people, on hearing this recording, would see this as a real loss. Indeed, surely only those who would insist on period instruments for Haydn would find fault with this wonderful recording by the still relatively unknown Solti, who was at the time the principlal conductor of the Bavarian State Opera in Munich.

So here's a chance to savour one of the greatest conductors of the postwar years in a relatively rare recording, given the full Peter Harrison restoration treatment and sounding quite superb!

HAYDN Symphony No. 102 in B flat major 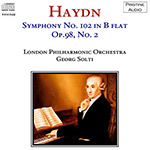