Grieg's only Piano Concerto is one of the best known pieces in the classical repertoire - perhaps only the opening few notes of Beethoven's Fifth Symphony could possibly be more familiar than the opening bars of this piece. As such it requires little introduction.

However, this particular recording is of note for two reasons. First and foremost for the soloist - there can be few serious classical recordings made by instrumentalists who went on to top the pop charts, but despite her great talent and training in the classical world, it was for her British boogie-woogie hits of the late 1950's that Trinidad-born Winifred Atwell became best known, whilst playing her "other piano", a deliberately battered 'honky-tonk' instrument, and in another world to this recording.

The second point of interest in this recording is that, although it was released as a standard mono record (the first stereo LPs appeared in 1958), it was among the first classical recordings made in stereo in the United Kingdom.

Decca began experimenting with a three-microphone system known as the 'Decca Tree' for their Kingsway Hall recordings in May 1954. The system, designed by Roy Wallace, used 3 directional cardioid-pattern Neuman KM-56 condensor mics suspended eleven feet above and slightly behind the conductor's platform on a cross-bar, pointed 30 degrees down to the orchestra and clustered tightly together to exclude reflected sounds from the sides and rear. The mixed signal was recorded on an Ampex 350-2 recorder at 15 ips. This further enhanced the reputation of Decca for superlative sound reproduction that arguably began with their first ffrr recordings of the mid-1940's.

Alas the music-buying public's interest in Winifred Atwell was short-lived and concentrated largely on her popular output - our research suggests that the issue remained in its original mono format, and it is that recording which we present here. We have yet to trace a stereo issue of this recording.

Decca’s first UK stereo recording was an experiment that remains unpublished and another year elapsed before the sequel. 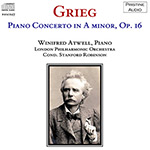