"...there are among his records some which come fairly close to the reality of his playing. A few even set a standard of unmannered perfection which transcends the bounds of fashion. Best among his earlier records, in my opinion, are a number of wonderful Bach interpretations, as well as the Schubert Impromptus and the Mozart Concertos K. 466 (D minor) and K. 491 (C minor)..."

Edwin Fischer's piano playing has become something of a quest for me as a restorer - it was his masterful recording of Bach's Well-Tempered Clavier which first switched me on to this wonderful performer, and I have been delighted to be able to find more 78rpm discs of his playing in superb condition from which to work.

This 1937 recording shows Fischer at his best, if perhaps somewhat let down by his orchestral accompaniment both in playing and sound. Clearly there's little I can change about the former, though I have done what I can to remedy the latter! Now you can savour one of Mozart's finest Piano Concertos at the hands of one of his greatest interpreters in this wonderful newly-remastered recording from Pristine Audio! 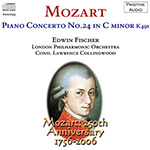 A first-rate performance of the work

One of the musical moods that Mozart, beyond any other composer, was capable of evoking was that of tragic passion. Works such as the Requiem, the Symphony No. 40 and the G Minor String Quintet exemplify this mood. With the Concerto No. 20, the Concerto No. 24 is at the very pinnacle of this genre. Beethoven's Concerto No. 3 seems an attempt to evoke it (compare the two opening themes), but Beethoven's work remains stoic, not tragic and does not convey the intensity of Mozart's.

Edwin Fischer and Lawrence Collingwood give a first-rate performance of the work. Collingwood directs an extremely poised performance of the orchestral part, allowing the vitally important woodwind parts to come through. Fischer's powerful arpeggios in the development section of the first movement have a surge, an elan that really conveys forward motion. Fischer is particularly good in the final movement, which is a set of rather simple sounding but contrapuntally brilliant variations. Fischer's lightness of spirit almost turns to a carefree impudence in parts of the movement.

With a work like this, one of the greatest of all piano concertos, I am compelled to recognize that Fischer's performance, as fine as it is, does not match the nobility and power of two others: the Casadesus/Szell monaural performance of the early 50's and that benchmark of modern performances: Piotr Anderszewski playing and conducting the Sinfonia Varsovia in the late 1990's. Yet the Fischer is well worth having and hearing for its special classical style and always vital phrasing.

The sound is very clear with fine registration of the woodwind. Fischer's piano is pure and ringing out.