Anatole Fistoulari made two recordings of Swan Lake for Decca: in 1961 a single stereo disk of extracts with the Amsterdam Concertgebouw; and this two-LP mono set with the LSO in 1952, now offered here.  We have been unable to trace a CD reissue of this earlier recording which is remarkable in many ways and deserves to be heard again.  First, one might comment on the recorded sound - wide-range in frequency response and vast in dynamics.  Then the violin soloist - not, as usual, the leader of the 1st violins but here no less a figure than Alfredo Campoli, making mini-concertos of his two sections.

Also remarkable is the 'version' - if such it can be called - of the Lake that is presented here. It is reported to be that of the performance score as used in the Covent Garden production of the period and, as such, the definitive 'Record Guide' described it as 'Complete' when it made its first (1953) appearance in that publication.  By the next edition that had been changed to 'Almost Complete', and subsequently it was downgraded to 'Extracts from'.  One has only to compare this version with a modern 'complete' recording, such as Dutoit's, to realise that 'almost complete' was optimistic.  Almost 60 minutes of music is missing!  Also, here you will find items in different orders (even in different acts), telescoped, extended, or plain hacked about.  The three extra numbers added by Drigo for the revised 1895 production are here included, though major items such as No 19, Pas de Six, and No 22 with its excellent cornet solo, are missing. (One wonders about the integrity of the plot-line in such a performance...)  Probably no other recorded performance has used precisely this version of Tchaikowsky's music.

Identifying and labelling the CD tracks of this ballet is always a major headache for the discographer.  We have chosen to use the numbering scheme (there are at least five others) that has been used for some other 'complete' CD recordings of the Lake, thus allowing easier comparisons by the eager listener.  A simple solution?  Far from it.  Even at the very first track we run into problems: is this, as we have labelled it, an Introduction that precedes Act I; or is it, as other reference works have it, Act I  No 0? And how are the three extra 'Drigo' pieces to be labelled?  We have made an attempt: probably incorrect, and we invite corrections.  We hope these difficulties don't detract from your enjoyment of a unique recording: the music, after all, is what these reissues are all about.

Footnote: Since writing these notes we've been made aware of a third recording of Swan Lake by Fistoulari - a 1973 Decca Phase Four issue with the Netherlands Radio Philharmonic Orchestra and Ruggiero Ricci taking the solo violin part.

The re-make on 28 Mar was to replace the violin solos, which had
originally been recorded by the LSO’s leader George Stratton 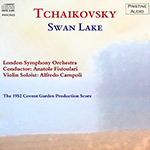 With humble apolologies to both Stravinsky and Prokofiev, I must state that Tschaikowsky is the greatest composer of ballet music and, further, that "Swan Lake" is his greatest ballet. Before Tschaikowsky, ballet music was written, like children, to be seen and not heard. Anyone enduring the dullness of the complete music of Gluck's "Don Juan", Beethoven's "The Creatures of Prometheus" or Adam's "Giselle" without the accompanying mise en scene will quickly understand. Admittedly, Delibes' Sylvia and Coppelia have greater standalone musical interest, but even these do not sustain interest through their 90 minute durations.

What is different about "Swan Lake" is its symphonic qualities: themes are introduced and developed; they reappear. For, example, that most haunting of all oboe melodies representing the swans comes back in many guises. There are transition passages instead of stop-and-go dance accompaniments. The themes and their moods are related to the action of the melodrama rather than just the gymnastics of the dancers. In short, one can listen to the music by itself without necessarily seeing the stage action, although knowing what is going on greatly enhances one's understanding and pleasure.

I have owned this Fistoulari recording for 53 years. When stereo came out and I gave away hundreds of monaural recordings, this one stayed. But I doubt if I knew how great a recording it was until I heard it in Pristine Audio's remastering. Although primarily a ballet conductor, Fistoulari brings out that "symphonic" quality I so prize in "Swan Lake". The drive is tremendous, but there is such delicate attention to detail. There is never a crude moment in a score that other conductors have played crudely. There is unfailing freshness and elegance. Tschaikowsky's mastery of orchestration is awesome and so is the LSO's playing; the front desks are incomparable. There are perhaps rivals in the Dorati Mercury mono and the Rozhdestvensky stereo, but this performance for me occupies one of the heights.

There is some undefinable magic for me in the sound which I cannot analyze. All I know is that it was 90 minutes of joy.