Artur Schnabel made four Mozart Piano Concerto recordings with the London Symphony Orchestra in the 1930s for HMV. So far we have already remastered the 1934 recording of the 27th Concerto, K595 (PASC005), and we're delighted now to add to this the 1937 recording of the F major Concerto, K459.

To state that I was delighted with the earlier recording is an understatement. And yet somehow HMV excelled themselves even further just three years later with this recording. I was very lucky to find a set of immaculate discs to work from, almost entirely free free from the 'bacon frying' crackle which typifies most HMV 78s of this era. This was one of those delightful sessions where the music almost fell off the disc and electronic intervention could be kept to an absolute minimum.

This concerto was the last of the six that Mozart wrote in 1784, completed on 11th December of that year, and his successful performances of this and the other recently completed concertos during a series of concerts, given in spring 1785 in Vienna, were to secure Mozart a prosperous future for the next two years. The recording here includes the cadenza as written out by Mozart; however the first movement, more usually played now as an Allegro Vivace, is marked on this recording as a slightly slower Allegro.

And so I invite you to take a listen to one of the finest recordings of one of Mozart's masterpieces, which has surely never sounded this good before! 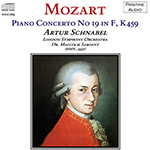