Take one of the greatest violinists of the twentieth century. Add one of the world's top orchestras and a truly great conductor, give them the score of the violin concerto of one of the greatest composers who ever lived and put them all into the safe hands of the Decca engineers of the 1950's - one of the best teams around. It surely has to be a recipe for success, doesn't it? Well, yes and no. The music went just fine, but I think it might have been a bit of a bad day at the office for the sound engineering team...

This restoration was, for me, one of my toughest assignments yet, involving the use of several copies of the LP and a lot of hair-pulling! They say you can't make a silk purse from a sow's ear, but that's exactly what I've attempted to do here. There's certainly nothing wrong with this fine performance - that's precisely why I was so keen to remaster it and let it be heard again.

But there were a myriad of difficulties with the recording as the engineers grappled to come to terms with the earliest tape recorders and nascent vinyl technology. The biggest howler came roughly midway through the second movement, where a five-minute retake section had clearly been cut into the original take, but at the wrong speed. I assume it was recorded on a different tape machine, running about two and a third percent slower than the original, and having the effect of raising the pitch by that same ratio.

How this was missed by the Decca engineers escapes me - it sounds like Ricci, Boult and the Orchestra had all taken a light whiff of helium, or perhaps engaged the services of Mickey Mouse! Happily this has been easily corrected here, and I've polished up many other rough edges in the audio - as always - so that they won't stop the listener from enjoying the excellent performance you'd expect from these musicians and this work. 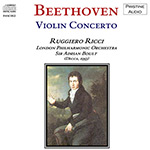