To call Stokoswki legendary is almost an understatement. Always an innovator, always prepared to question, to court controversy and to search for excellence, he was without doubt one of the greatest conductors of all time.

Stokowski single-handedly turned the Philadelphia Orchestra into one of the world's greatest during his time with them between 1911 and 1941, and the legacy of that can be heard here in this astounding recording of TchaIkovsky's Fifth Symphony, recorded in 1934 and now sounding stunning in this brand new remastering by Andrew Rose at Pristine Audio.

Unusually for any 78rpm recording this appears to have been recorded in a single take - or at least a movement at a time, rather than the more conventional one-side-at-a-time approach. This gives the whole performance a greater degree of coherence and inevitability - a far cry from modern techniques where some conductors record literally a bar at a time to edit together afterwards.

This is surely one of the great historic recordings of all time - if you don't have it you should get it - if you do have it, well perhaps it's never sounded better that it does here!

TCHAIKOVSKY Symphony No. 5 in E minor 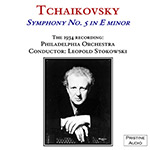 All in all this is a rather fine performance

Tschaikowsky was on tour about to rehearse his new symphony (#5) in Hamburg (Spring, 1889) when he discovered that Johannes Brahms was occupying the same hotel. At previous meetings, they had been cordial to each other, but they did not like each others' music. Brahms, however, postponed his departure in order to hear the rehearsal of the Tschaikowky. At a well-lubricated dinner afterwards, Brahms said he liked the first three movements, but did not care for the finale. Tschaikowsky, who in letters to his patroness, Madame von Meck, had already rather excoriated the symphony, was somewhat buoyed up by Brahms' judgment.

We may speculate on what Brahms, a masterful finale composer, disliked about the finale of the 5th symphony. It begins with the symphony's motto (which starts the symphony in a doleful E minor) now played rather majestically in E major. In the major key, it sounds a bit artificial and rather bombastic and it goes on without much incident for a while. Thankfully, it segues into one of Tschaikowsky's most dashing and brilliantly breathless allegros which is the heart of the movement and is filled with glorious melody and incident. Ultimately to end the movement and the symphony, Tschaikowsky goes back to a very martial version of the motto theme. Here he tries to create maximum triumph, but takes a long time to end things using every delaying tactic in his "coitus interruptus" manner before ending the work. The problem for the conductor is to sustain the genuine excitement of the long middle section through the somewhat artificial excitement of the final section to get to the blessed final note. Let's see how Stokowsky in his prime (1934) makes out.

Stokowsky begins the Symphony with a sad but firm statement of the motto theme and a controlled but beautiful statement of the lovely second theme. No wallowing and no distortion. An excellent playing of the development follows, almost convincing us that Tschaikowsky knew how to develop a theme (not until the first movement of the Pathetique does he show what might have been if only he hadn't drunk that glass of unboiled water). Stokowsky almost ruins things by presenting the recapitulation of the motto them too slowly but recovers to end the movement well.

Both Tschaikowsky and Stokowsky are magnificent in the incredibly beautiful second movement. Stokowsky refuses to just float in the blue sea of melody and keeps a tight rein until nearly the end when his and the Philadelphia's letting go has an enormous effect. The fresh and dewy playing of the orchestra in the third movement almost entirely conceals this movement's lack of stature.

Stokowsky's performance of the finale pokes holes in my expectations from above. He begins the first section at a moderate tempo and achieves a certain valedictory air. Not what I was expecting, but not too bad. Now, I'm ready for the allegro and a rather brutal chase. It doesn't come. Stokowsky conducts a very competent, but not terribly exciting allegro, filled with very good brass incidents. And now I'm a bit disappointed and dreading the final peroration. When it comes, however, it seems to have a lot of energy on its own without any help from the middle movement and I quite enjoy it. I ride it to the end with little sense of bombast. I still miss the central allegro, but I conclude that all in all this is a rather fine performance of Tschaikowsky's Fifth Symphony.

My only reference to the reproduction that I am very fond of 1950's mono sound and here is another example of it.

Restorer's clarification: Bill's reference to "1950's mono sound" apparently refers back to a previous review where he lavished praise on a 1927 recording I'd remastered. The implication is that it sounds a lot better than one might expect!