After the Second World War, Clemens Krauss consolidated his position as the Johann Strauss interpreter par excellence. The Strauss concerts he gave in Vienna, each New Year, were famous - three of them were specially recorded (probably in advance of the concert itself) by the superb audio engineers at Decca, of which this, the first, is "pure gold" (The Record Guide, 1956):

"The Pièce de resistance is the full-length version of Tales from the Vienna Woods, with the most delicious and nostalgic zither. Im Krapdenwald (the name of a forest, presumably near Vienna) uses Toy Symphony instruments, including a persistent and slightly out of tune cuckoo... The Josef Strauss (right) pieces are fully worthy of their company, especially The Dragonfly, which flits lazily over harmonies that hardly stir in the summer heat. These are three of the most attractive light music records in the whole catalogue."
[the last line refers also to the 1953 and 1954 releases]

Not surprisingly then, this is another winner of the coveted double-star award, and is a delight from start to finish. Another superb restoration by Peter Harrison of disk2disc. 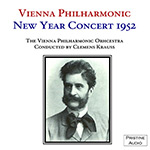 The rubato is so natural; the pauses are just right; the plunges are so thrilling

The Vienna New Years Day Concert is not a rather informal occasion like the Boston Pops or the London Proms, but rather a greeting to the New Year with joyful hope. The music played here was composed in a time when there was great faith in human progress and great belief in the triumph of Western Civilization. It was performed in a recently de-Nazified Vienna anxious to forget the rigors of war and Russian occupation and its rather enthusiastic junior partnership with Germany. We are hearing this splendid remastering in a time when Western Civilization's future is dubious at best, save only its technology. So, let's enjoy the technology.

The performances are famous and incredibly good. No other orchestra can perform this music written by Viennese for Viennese like the Vienna Philharmonic. Few conductors other than Clemens Krauss can play it to the manner born--the rubato is so natural; the pauses are just right; the plunges are so thrilling. Perhaps only Bruno Walter, Felix Weingartner and Willy Boskowsky can match Krauss here. The drill sergeant Szell, the fine tool polisher Reiner, the ersatz joymaker Maazel, the perfect Karajan, even the lover Bernstein cannot match Krauss here.

The transcriptions are magnificent in a very special way. They do not sound like recordings made in 2005. They don't sound like what a good seat in the balcony at the Vienna Philharmonic would have sounded like (I've been there.) They sound like the most natural vision I could imagine of the originals (I have the originals). There is not a hint of stridency or artifice. There is no unnatural edge, no distortion. The strings gleam, but don't glitter. The cellos and basses have punch, but don't growl. There is no detectable surface noise. The recording of the waltz "Tales from the Vienna Woods" is quite possibly the greatest musical/audio experience I've ever had with a Johann Strauss composition. The magic zither introduction and postlude is so perfectly reproduced that it does force a nostalgic reminder of what we have lost.