This piece of music has a history almost as fascinating as the story of its recording - so much so that there's probably a book to be written about it. As briefly as I can then: Schumann wrote it for the famed violinist Joachim, who refused to play it. Upon the death of Schumann it was decreed that it should not be played for 100 years and the manuscript disappeared into the vaults of a German library and was largely forgotten. But not entirely. The rumours of its existence persisted, even to the extent of it being proclaimed in a seance. Then along came the Nazis, who wanted a good German violin concerto to replace the Mendelssohn which, thanks to his being a Jew, now no longer officially existed. Tearing up the 100 year rule they set about exhuming this concerto and putting together first a performance and then a recording. It became a race against Yehudi Menuhin, and a matter of German honour and pride, and thus the version heard here - partly edited by no less than Paul Hindemith - got there first (with a little help from a certain Herr Joseph Goebbels).

Not only that but judging by the recording quality of this performance it seems the Nazis probably insisted in throwing all the German recording technology at their disposal at this work to make sure it was superior in every respect to anything which might follow it. We can't prove it, but just a year before this recording was made, German sound engineers demonstrated the first tape recording of an orchestra in London, and we strongly suspect that this was taped too. The sound quality is certainly far above that being achieved elsewhere in the world at the time, and German engineers had access to recording equipment which would not be seen elsewhere until 1945 and later.

This really is a superlative recording of its era of a most rare and wonderful concerto. I was once seated at dinner next to the second violin player of one of the world's most famous string quartets, and told him the story related above, to which he replied "Schumann never wrote a violin concerto." Well he did - and that violinist now has a copy of this recording to prove it. Why not take a listen to the sample from the lavish second movement and see if you don't agree with one Pristine Audio website visitor, who wrote, having heard a similar excerpt: "The Schumann broke my heart. The sound you are revealing is a revelation... I have now played the short excerpt about 30 times. Can I purchase a copy from you please?" - and so was born Pristine Audio Direct...

NB. Since these notes were written, for the launch of this website in February 2005, the following has been made available at Wikipedia:

Robert Schumann’s Violin Concerto in D minor was his only violin concerto and one of his last significant compositions, and one that remained unknown to all but a very small circle for more than 80 years after it was written.

Schumann wrote it in Düsseldorf between 11 September and 3 October 1853 for the violinist Joseph Joachim. He had just previously completed another work for Joachim, the Fantasie in C major, Op. 131. On 1 October, the young Johannes Brahms entered the Schumanns’ life. It appears that Schumann composed the finale of the Concerto in three days: 1-3 October, after making Brahms’s acquaintance. Later in October, he collaborated with his new friend Brahms and his pupil Albert Dietrich in the 'F-A-E' Sonata for violin and piano, also written for Joachim.

Though Joachim performed Schumann’s Fantasie, he never performed the Violin Concerto. After playing it through with piano accompaniment for Schumann in October 1853, he retained the manuscript for the rest of his life. After Schumann’s attempted suicide in February 1854 and subsequent decline and death in a sanatorium in Endenich, Joachim evidently suspected the Concerto was a product of Schumann’s madness and thought of the music as morbid. Joachim’s biographer Andreas Moser reproduced a letter in which Joachim discussed Schumann’s Concerto as showing ‘a certain exhaustion, which attempts to wring out the last resources of spiritual energy’, though ‘certain individual passages bear witness to the deep feelings of the creative artist’.

Joachim’s opinion prevailed on the composer’s widow Clara and on Brahms, and the work was not published in the Complete Edition of Schumann’s works and was in effect kept secret throughout the 19th century. Brahms did however publish, in a supplementary volume of the Schumann Edition, ‘Schumann’s last musical thought’, a theme on which Schumann had begun to compose variations in early 1854. Schumann had thought the theme had been dictated to him by the spirits of Mendelssohn and Schubert, no longer recognizing that it was a melody he had used in the slow movement of the Violin Concerto. Brahms also wrote a set of piano-duet variations on this theme, his Opus 23.

Joachim deposited the manuscript of the concerto with the Prussian State Library in Berlin, and stated in his will (he died in 1907) that the work should be not played or published until 100 years after the composer's death, i.e. until 1953. However in March 1933, during a spiritualist séance in London attended by Joachim's two grand-nieces, the sister violinists Jelly d'Arányi and Adila Fachiri, a spirit-voice identifying himself as Robert Schumann requested Miss d'Aranyi to recover an unpublished work of his (of which she claimed to have no knowledge) and to perform it. In a second message, this time from the spirit of Joachim, they were directed to the Prussian State Library.

Yet no more was heard for four years, until in 1937 Schott, the music-publisher in Mainz, sent a copy of the score to Yehudi Menuhin asking for an opinion. He played it through with Hephzibah Menuhin, and reported to the conductor Vladimir Golschmann in July 1937 that it was the historically missing link of the violin literature. Menuhin planned to deliver the world premiere at San Francisco, and announced it for 3 October, but was interrupted by the appearance of Jelly d'Aranyi, who claimed the right of first performance for herself on the basis of the spiritualist messages.

However all of this was to no avail, for the world copyright to the Concerto was held in Germany, and the German government insisted on the world premiere being given by a German. Georg Kulenkampff had worked on the score in some detail to render it playable, with Paul Hindemith (who, though his own works were now prohibited from performance in Germany, prepared the violin-piano reduction) and with George Schunemann, and it was Kulenkampff who gave the first performance, on 26 November 1937, with the Berlin Philharmonic Orchestra. Kulenkampff recorded it soon after the first performance. Menuhin gave the second performance, in the piano version, accompanied by Ferguson Webster, at the Carnegie Hall on 6 December 1937, and repeated this with the St Louis Symphony Orchestra under Golschmann on 23 December. Jelly d'Aranyi gave the first London performance, with the BBC Symphony Orchestra.

The Concerto has only slowly made its way into the concert repertoire, partly due to the authority of Joachim’s judgement of it and a general critical perception that the first movement was too heavily scored; but it is now recognized as an important work of the composer. For a recording made in 1988 the German violinist Thomas Zehetmair went back to Schumann’s original manuscript, correcting many errors in the published edition.

The Concerto is in the traditional three-movement form, fast-slow-fast. It belongs less to the poetic and passionate style of Schumann's early masterpieces than to the more objective, classical manner of his later music, as ushered in by the 'Rhenish' Symphony of 1850. Certainly the opening movement in D minor is conceived more on symphonic than concertante lines. Its powerful opening subject dominates the proceedings, and although the violin’s role is extremely taxing, its subordination to a ‘symphonic’ scheme is emphasized by the fact that there is no cadenza. The slow movement, in B flat, has the character of an intensely lyrical intermezzo, and passes without a break into a vigorous and dance-like sonata-rondo finale in D major. An unusual feature of the movement is its strong polonaise rhythm.

Albert Dietrich, who must certainly have seen Schumann’s Violin Concerto in the month of its completion, composed a Violin Concerto of his own in 1874, intended for Joachim, which is in the same key (D minor) and also has a finale in Polonaise rhythm. It is possible that it was influenced by his private knowledge of the unperformed work. 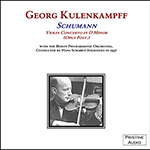