When a conductor of Boult's standing and abilities has something to say to the world, and he is given Elgar's First Symphony and the London Philharmonic to do it with, you know something amazing is going to come out of it. In his first recording after leaving the BBC, Boult brings his huge authority to bear in a performance which set the standard for many years before superior recording technology left this masterpiece behind. Hear it again in superb sound in another brand new Pristine Audio restoration. 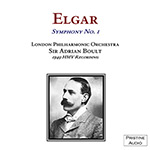