Perhaps at his greatest when playing Beethoven, Schnabel recorded the "Emperor" Concerto on three occasions, this being the first and perhaps most satisfying interpretation captured on record. We've worked hard to tame the many rough sonic edges of this early recording to allow Schnabel's superlative playing to shine through on this new Pristine Audio restoration for 2005, easily and demonstrably better than certain other restorations on the market today!

Note: at the end of January 2007 I returned to this recording following the development of the Pristine Audio Natural Sound method for the re-equalisation of vintage recordings. I had already made what I felt at the time were major inroads in the improvement of this deeply flawed recording, but nothing prepared me for what was possible. There will always be a degree of hiss and occasional distortion in a recording as poorly made as this. However, for the first time in 75 years, we could now claim to have a very good idea of what the performance actually sounded like at the time.

Further minor improvements were made following a new transfer in March 2007 using mainly US pressings which were generally quieter than their UK counterparts. This allowed for a reduction in the degree of noise processing and some further refinements to the Natural Sound processing technique to be applied. 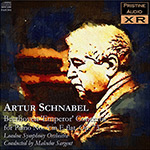 The Piano Concerto No. 5 in E-flat major, op. 73 by Ludwig van Beethoven, popularly known as the "Emperor Concerto", was his last piano concerto. It was written between 1809 and 1811 in Vienna, and was dedicated to Archduke Rudolf, Beethoven's patron and pupil. The first performance took place in December 1810 in Leipzig.

This concerto is very well known, and quite popular. In October 2007 it was voted number One in the Australian Broadcasting Company's Classic FM Classic 100 Concertos.

Like the "Moonlight Sonata", the title of "Emperor" for this concerto was not Beethoven's own. Its duration is approximately forty minutes.

The concerto is scored for solo piano, two flutes, two oboes, two clarinets (one in B-flat, the other in A), two bassoons, two horns, two trumpets, timpani in E-flat and B-flat, and strings.

The "Emperor" is divided into a standard three movements. As with Beethoven's other final concerti, this work has a relatively long first movement. (At twenty-five minutes, the Violin Concerto has the longest; Piano Concerto Nos. 4 and 5 each have opening movements about twenty minutes long.)

The piece begins with three full orchestra chords, each followed by a short cadenza, improvisatory in nature but written out in the score. These short cadenzas recur intermittently throughout the piece.

As music's Classical era gave way to its Romantic era, composers began experimenting with the manner in which one or more solo instruments introduced music. Beethoven had already explored such possibilities in his Piano Concerto No. 4, but the monumental piano introduction in Piano Concerto No. 5 – it lasts for nearly two minutes – foreshadowed future concerti such as Mendelssohn's Violin Concerto or Tchaikovsky's Piano Concerto in B-flat minor.

The first movement is deceptively complex. Despite its use of simple chords, including a second theme constructed almost entirely out of tonic and dominant notes and chords, it is full of complex thematic transformations. The complexity is intensified once the piano enters with the first theme, as the expository material is repeated with far more complex variations, virtuoso figurations, and complex modified chords. The second theme enters in B major.

Aside from the opening cadenzas, the movement follows Beethoven's trademark three-theme sonata structure for a concerto. The orchestral exposition is a typical two-theme sonata exposition, but the "second exposition" with the piano has a triumphant virtuoso third theme at the end that belongs solely to the solo instrument. Beethoven does this in many of his concertos. The coda at the end of the movement is quite long, and, again typical of Beethoven, uses the open-ended first theme and gives it closure to create a satisfying conclusion.

The heroic nature of the movement is perhaps exemplified in a passage in the development section, where it seems the piano and the orchestra are going to war — and the piano wins.

The second movement in B major is, in standard contrast to the first, calm and reflective. It moves into the third movement without interruption when a lone bassoon note B drops a semitone to B-flat, the dominant note to the tonic key E-flat.

The final movement of the concerto is in seven-part rondo form (ABACABA), a typical concerto finale form. The piano begins the movement by playing its main theme, then followed by the full orchestra. The rondo's B section begins with piano scales, before the orchestra again responds. The C section is much longer, presenting the theme from the A section in three different keys before the piano performs a cadenza. Rather than finishing with a strong entrance from the orchestra, however, the trill ending the cadenza dies away until the introductory theme reappears, played first by the piano and then the orchestra. In the last section, the theme undergoes variation before the concerto ends with a short cadenza and robust orchestral response.