“Schubert has been well served this month by his interpreters in the records that have come my way. Clifford Curzon, like Elizabeth Schwarzkopf and Edwin Fischer, in the Lieder recital reviewed elsewhere in this number, achieves the same intimacy of presentation and, in an eminent degree, gives one the impression that he is with you, playing to you in your room. That is indeed a most delightful impression: but the matter goes further, for, in a way that defies verbal description, Mr. Curzon's great artistry makes one feel that Schubert just in this way played and improvised to his friends. Only pianists will realise the technical skill that lies behind Mr. Curzon's playing of the first F minor Impromptu which, as Kathleen Dale writes in her chapter on the piano music in the Schubert Symposium edited by Gerald Abraham, is “perhaps the most difficult to play of all the eight Impromptus, for it contains some of Schubert's trickiest cross-hand passages and calls for very neat finger-work in many places.”

What a joy, also, to have a meditative and not a jaunty and jerky performance of the well-loved A flat Impromptu. The phrase ends, with their little flicks of notes, are beautifully moulded in Mr. Curzon's exquisite performance of the equally well-loved variations on the Rosamunde B flat theme, and the brilliant last variation is enchantingly played: but I personally like a slightly more cantabile treatment of the rocking bass figure in the preceding G flat variation. There are Czech influences, Miss Dale tells us, in the fourth Impromptu, in which we never get the expected singing tune but instead “gay, springing figures, scintillating scale-passages and swirling decorative runs.” This fascinating piece is gloriously played, and as Mr. Curzon ended his grand performance of these Impromptus I thought of Schubert’s lovely song, An mein Klavier, in which the composer seems to be thanking his dear piano for ail the beauty it has yielded up to him.”

“Curzon was a highly self-critical performer, and although he signed for the Decca recording company in 1937 and remained with them throughout his career, he was rarely at ease in the studios, and frequently refused to allow the release of recordings in which he felt dissatisfied with his performance.” – Wikipedia

It is a shame that Clifford Curzon left so few recordings. His solo studio recordings were particularly thin on the ground. This disc brings together the three major Schubert recordings he made in the earlier part of his career – a glance at the recording dates indicates that he would return again and again to the studio to remake 78rpm sides he was unhappy with, the Wanderer-Fantasie taking four sessions over three years to complete. Not surprisingly the sound quality increases dramatically from the earliest to the most recent of these recordings. Nevertheless, these Ambient Stereo XR remasters bring new clarity and life to all three pieces, as well as correcting numerous pitching instability problems heard on previous transfers. 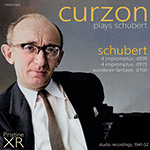