"If Erik Satie were alive today — and what a pity he isn't—he would be just short of 105 years old and, very likely, astonished by the attention his music is getting nowadays. It is the kind and quality of the attention, I think, that would have surprised him, for he was not without a certain renown during his lifetime. But his fame, outside his own limited circle of devotees, was chiefly as a perpetrator of musical jokes and gags. For most musicians he was an eccentric not to be taken seriously, and he had no commercial success at all. He lived in poverty.

Today, his listings in the Schwann Catalogue fill a column, and works that once seemed nonsensical to most people sound quite logical and beautiful to a broad spectrum of listeners. Satie was one of those unfortunates who are so far ahead of their times that they live out their entire lives as anachronisms—aliens in the eras in which they are forced to exist.

On the whole, the French have shown little more active interest in Satie since he died than while he was alive. The listings in Schwann show that it is non-French musicians who have done the most to bring his music to the attention of- the general public.

Prominent among these is Aldo Ciccolini, the Italian pianist, who can now be credited with five disks of Satie’s music…"

The somewhat enigmatic music of Erik Satie has long captivated and, to a degree, confused me. When I realised that we had so little of him in our catalogue - a couple of pieces recorded by Poulenc (with Georges Auric, PASC324) in the 1930s - I started wondering why he never showed up in the thousands of recordings we audition for possible restoration and remastering. The answer is simple - as a recorded composer he is practically invisible until the late 1960s, just outside our normal remit for historic recordings.

One name repeatedly stands out in these searches: Aldo Ciccolini. The recordings he made in 1956, presented here, were almost ignored at their time of issue, sniffily dismissed by the critics of the day. But by the late 1960s his Satie (a second LP was recorded in 1963) was apparently inexplicably being 'rediscovered', and had started selling in such quantities that his  record company wasted no time in whisking Ciccolini back into their recording studios in the quest for more of the same. By the spring of 1970 a seventh album was in production and the Italian Ciccolini was being credited almost single-handedly with bringing the little-known French composer to mass attention.

This first set of Ciccolini's Satie has benefitted greatly from Ambient Stereo XR remastering, which has brought a new depth, warmth and spaciousness to Ciccolini's performances. The pieces are now ordered chronologically by date of composition. I decided to also include a favourite work by César Franck, the Varations Symphoniques, ressurected from an excellent 1953 disc with Cluytens conducting, in order to make up an album I'll personally be enjoying for a long time to come. 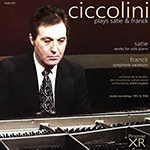