This 8th volume devoted to the artistry of Jascha Spivakovsky features an array of solo works ranging from Baroque through late Romantic periods. All of these performances showcase the pianist’s musical versatility and remarkable interpretative abilities, his trademark crystalline transparency of texture and beauty of tone ever-present as he respects key stylistic parameters of each era while bringing individual touches to his interpretations.

Spivakovsky’s affinity with the music of Beethoven has been evident from the six sonata readings issued in previous volumes and is now even more apparent in the stellar 1955 and 1957 broadcast performances of two more in this volume. In these less frequently played early sonatas - Op.14 No.1 and Op.27 No.1 - the pianist’s magnificent clarity, rhythmic precision, and mindfully crafted phrasing serve to highlight both structure and character. Particularly notable is his capacity to provide emphasis without distorting the melodic line or hardening tonal quality: boldly shaped runs and accented octaves are never harsh yet provide the strong contrasts idiomatic to Beethoven’s writing, all the while sustaining the lyrical elements of the music.

A 1960 ABC broadcast of Schumann’s Arabeske finds Spivakovsky playing with fluid phrasing and sumptuous tone, his skilled pedalling enhancing colour without sullying the overall texture. The three Chopin works presented here from a 1967 ABC TV broadcast were featured elsewhere in this series in different interpretations, yet these later traversals help us to better appreciate variations and similarities in the pianist’s approach. Aged 70 at the time of the transmission (of which only the audio survives) and having already curtailed his international touring schedule due to a health crisis, Spivakovsky shows no diminution in his power or technical capacity, yet he eschews bombastic showmanship to temper strength with lyricism. The G Minor Ballade features the same breadth and expansiveness as the 1966 home practice session, with some differences in timing and phrasing. The Revolutionary Etude offers a touch more intensity than the home recording of a few years previously, yet with equal clarity and mindful shaping, while the Fantasie Impromptu is similar in intensity and drive to the issued 1955 reading yet with even greater depth of tone.

In a 1955 ABC broadcast of a once-popular Gluck encore - the Gavotte in A Major, beautifully arranged by Brahms - Spivakovsky plays with a sumptuous sonority, marvellous tonal and rhythmic control, and refined dynamic gradations. Time stands still as his burnished singing line in the middle section soars over the detached accompaniment. Two works by Brahms find the artist at his best, with wonderfully transparent layering and legato phrasing on his prized 1910 Blüthner recorded at his home in 1961. He plays in a manner similar to what can be heard in recordings made by pianists who knew the composer, with a vitality of rhythm and clarity of texture often lacking from the overly-serious readings of today. Jascha brings a unique combination of poise, enthusiasm, and wit to these performances, with supple phrasing and nuancing in the Intermezzo Op.119 No.3 and buoyancy and vivaciousness in the Capriccio Op.76 No.2.

With the final ‘encore’ of La Campanella - one of the few recordings we have of Spivakovsky playing Liszt - the 70-year-old pianist closes his 1967 television broadcast and this compilation with dazzling finger work, deftly-defined articulation, and glistening tone. Even in works as overtly virtuosic as this showpiece, he burnishes the melodic line and discreetly adjusts his timing to underline the emotional content of the work.

Once again Jascha Spivakovsky reveals his master musician status by striking an ideal balance between objectivity and individuality, being faithful to the score while adding refined personal touches that bring the music to life. 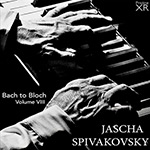