Egon Petri was something of a living contradiction. A citizen of the Netherlands from birth, he never resided in Holland and was not fluent in the Dutch language. He was a modest giant of a man, a reluctant virtuoso who had to be coaxed away from academia to perform. Born in Hanover, Germany in 1881, he grew up in Dresden. He learned the violin under his father, a professional musician, and in his teens played with the Dresden Court Orchestra. But it was his early studies at the piano that brought encouragement from Paderewski and Busoni, and ultimately led to his concentration on that instrument.

Petri became an acolyte of Busoni, eventually following him to Switzerland to help edit the composer/pianist’s edition of Bach’s keyboard works. During the 1920s, Petri taught in Berlin, where his students included Victor Borge, Gunnar Johansen, Ernst Levy and Vitya Vronsky. From 1927 to 1939, his base of operations was Poland; but the German invasion forced him to flee, ultimately settling in the United States. A heart attack in 1946 curtailed Petri’s concertizing activities, and he eventually moved to California, teaching at Mills College. His pupils there and earlier at Cornell University in New York included Eugene Istomin, John Ogden, Ruth Slenczynska and Earl Wild. He died in Berkeley in 1962.

Petri’s first discs were made in Berlin for Electrola in 1929/30, and featured works by Chopin and Liszt, including some of the latter’s Schubert transcriptions. From 1935 through 1938, he recorded for English Columbia, and the bulk of his legacy on disc comes from this period. He made three highly-esteemed Brahms recordings at this time: two sets of Variations (on themes of Handel and Paganini), and the Violin Sonata with Szigeti presented here, a classic account which has rarely been out of the catalog.

After his move to America in 1939, he began an association with Columbia’s US affiliate which lasted for 12 years. While there, he recorded the two Brahms Op. 79 Rhapsodies, as well as the one in E flat from Op. 119. He also set down versions of the four Ballades and the Six Pieces from Op 118, but these remained unpublished until the CD era.

His recording of the Viola Sonata dates from this period. Samuel Lifschey was the principal violist of the Philadelphia Orchestra from 1925 to 1955, equally spanning the Stokowski and Ormandy eras. His only other disc credit was for playing the “role” of Sancho Panza on the classic Feuermann recording of Strauss’ Don Quixote under Ormandy (reissued on Pristine PASC 168). This sonata has never previously been reissued on LP or CD.

After his last Columbia session in 1951, Petri recorded three LPs for the American budget label Allegro-Royale, one each of works by Beethoven, Liszt and Brahms. The recording dates and locale are unknown, but the Brahms disc was issued in 1955. It includes Petri’s only recordings of the three Op. 117 Intermezzi, and has not previously appeared on CD. (The last two Ballades from Op. 10 were not able to fit on the current CD release, but they are available with your free download in CD quality at the Pristine website when you order a CD.) The following year, he made his final recordings for Westminster, some in stereo, which have recently been reissued on CD by Deutsche Grammophon.

Violin Sonata No. 3 in D minor
with Joseph Szigeti

Viola Sonata No. 1 in F minor
with Samuel Lifschey 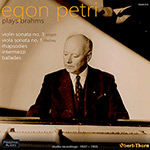